Fact check: Video of a girl rescued from snow claiming to be from Murree, Pak, is from Poonch, India

Video showing a girl being rescued after being trapped in heavy snow is from Poonch in Jammu and Kashmir and not from Pakistan. 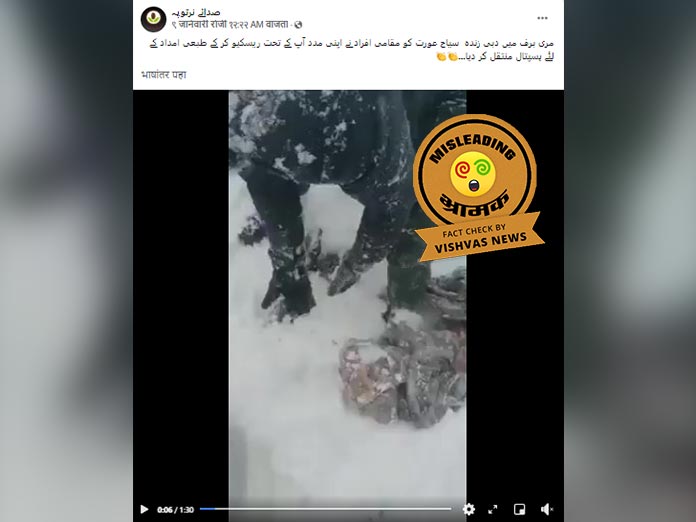 Translation: The surviving tourist woman buried in Murree snow was rescued by the locals and shifted to the hospital for medical treatment.

Vishvas News found out that this video was posted on many profiles on social media, with similar claim, mostly because of a deadly blizzard in Pakistan in January.

Vishvas News, started its investigation with the use of InVid tool.

We received many screengrabs and later, Vishvas News ran Google Reverse Image Search on all the screengrabs one by one. We came across YouTube channel of CNN-News18 where the video was posted. The description of the video said: A Girl was buried under thick Snow after an avalanche had hit the Poonch Region in Jammu. She was saved by a group of Alert locals who dug her out of the Snow in time. The girl is now recovering in a hospital and is out of danger.

We also a found a news of the same on the portal, Jammu Links News.

It said: A 37-year-old woman and her minor daughter were rescued by villagers from an avalanche in a remote village in Jammu and Kashmir’s Poonch district on Saturday, officials said. They said the villagers acted swiftly and evacuated the two after pulling out the woman and her daughter from the snow.

We also found this video on the website of newsflare.

The article said: Rescuers save girl trapped in avalanche in northern India

In the next step of investigation, Vishvas News contacted Dainik Jagran’s Kashmir based bureau chief, Naveen Nawaz for verification. He confirmed that the video is from Surankote area, Manai Village in Poonch. A lady and her daughter were on their way to fetch water, when the avalanche struck and they were stuck in the snow for over an hour. Later they were rescued.

Vishvas News in the last step of investigation did the background check of the profile that shared the video. صدائے نرتوپہ is followed by 4100 users while it follows 557.

Conclusion: Video showing a girl being rescued after being trapped in heavy snow is from Poonch in Jammu and Kashmir and not from Pakistan.