In the investigation of Vishwas News, the claim about the viral video of a girl with a gun turned out to be false. The girl is neither a teacher nor from the Muslim community. 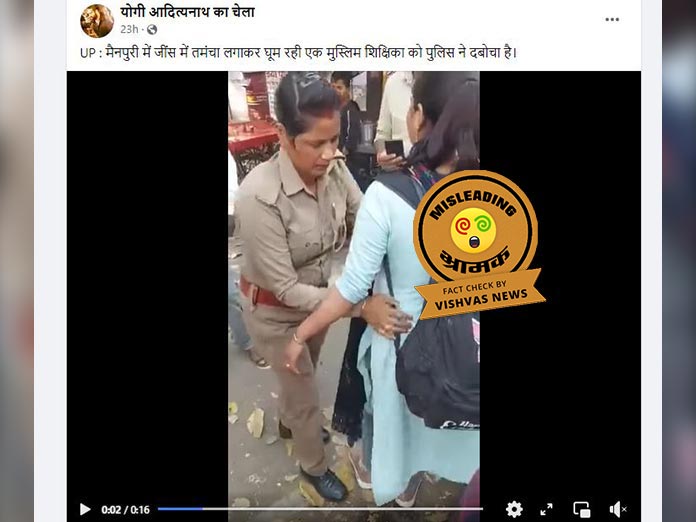 New Delhi (Vishvas News). A woman was arrested by police in Uttar Pradesh’s Mainpuri on Tuesday after being caught with a gun. By sharing this video, social media users are claiming that the girl was a teacher and belonged to the Muslim community. The viral claim turned out to be false in the investigation of Vishvas News. The girl is neither a teacher nor from the Muslim community.

Facebook user योगी आदित्यनाथ का चेला posted the video and wrote, “UP: A Muslim teacher caught by the police, she is walking around with a gun in Mainpuri.”

To know the truth of the viral claim, we searched on Google through some keywords. We found a report related to the claim on the website of Dainik Jagran. This report was published on 13 April 2022. According to the report, a girl from Firozabad was eating chaat on the roadside with a pistol. After getting information about this, police arrested her. The girl is not a teacher nor does she belong to the Muslim community.

Taking the investigation further, we started scanning the official Twitter accounts of Mainpuri Police. We found a tweet related to the viral claim posted on 13 April 2022. Replying to a Twitter user, Mainpuri Police wrote, “After investigation in the case, it was found that the woman caught with the gun is not a teacher. A case has been filed against her and investigation is going on.

For more details, we contacted Kotwali police station in-charge Anil Singh with the help of Dilip Sharma, bureau chief of Dainik Jagran’s Mainpuri division. He told us that the viral claim is false.
The girl is neither a teacher nor from Muslim community. The girl has studied till 12th and her name is Karishma Yadav. The girl has said that she is a resident of the Nayi Abadi Phulwari police station area in South Firozabad. According to the girl, her mother had committed suicide after killing her father. After the death of her parents she has become the owner of a lot of property. So her life is in danger, due to which she keeps a gun with her.

Next, we scanned the profile of the social media user who shared the viral post. The user is followed by more than a thousand people on Facebook. User lives in Maharashtra’s Mumbai.

Conclusion: In the investigation of Vishwas News, the claim about the viral video of a girl with a gun turned out to be false. The girl is neither a teacher nor from the Muslim community.