Fact Check: Viral video of monkey hugging an old women, is from Rajasthan not Maharashtra

Vishvas News conducted a fact check on the video of a monkey hugging an old lady going viral claiming to be from Maharashtra. However, the video was found to be from Phalodi, Rajasthan. The name of the lady too is not Bhdsale but, Bhawari Devi 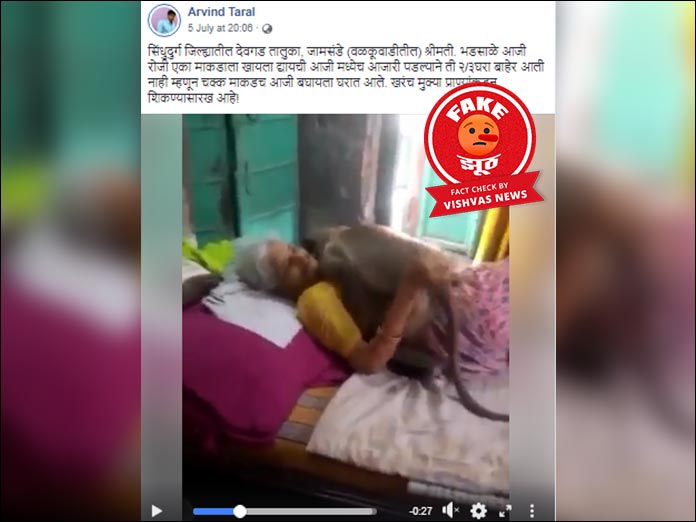 Claim:
Vishvas News came across a video of a friendly monkey going viral on various social media platforms. The monkey was seen hugging an old lady while she lay on her bed and her relatives saw the monkey doing his tricks while someone recorded a video.

Translation: Incident of Jamsande, of Sindhudurg district, Devgad Taluka. A lady Bhadsale used to give food to a monkey everyday. She fell ill and could not go out for a couple of days. Hence the monkey came to her house to meet her. There is a lot to learn from animals.

Investigation:
Vishvas News started its fact check by uploading the viral video in InVid tool. We got some key-frames from the tool and we ran simple google reverse image search over the key-frames.

We found this video used in a news article on Claim your India.com.
The news published on June 23, 2021 was titled: This Cute Video of a Langur Hugging a Dadi is Going Viral, Internet Loves it

The news was written using the dateline, Jaipur. The news mentioned that, the video was shot in Phalodi area of Rajasthan’s Jodhpur district.

The news also stated: The 35-seconds-long video clip begins with the langur sitting on the bed beside the 90-year-old woman named Bhanvri Devi. Throughout the video, one can see another woman standing near the bed with folded hands. It also mentioned that the family members said it came out of nowhere.

More internet search also led us to a video uploaded on ‘channel 24 plus news’. This news had the reactions of the old lady with whom the incident happened and another relative. Nowhere did they mention that the lady used to go out and give food to the monkey everyday.
This video was uploaded on the YouTube channel on June 27, 2021. Watch this news here.

Vishvas News hence in the last step of investigation contacted, Dungar Singh, senior reporter of Channel 24 News, Jodhpur. Dungar Singh told us that there is a monkey in the Phalodi region near Jodhpur in Rajasthan, where a monkey is very friendly with humans. He is occassionaly sighted with people. One such video of the same monkey playing with a kid too went viral over social media platforms. He shared the video with Vishvas News too. He said that the team of Phalodi covered the news once the video went viral.

Vishvas News now conducted a social background check on the Facebook user who had shared the video on his profile. We found that the user is a resident of Mumbai.

Conclusion: Vishvas News conducted a fact check on the video of a monkey hugging an old lady going viral claiming to be from Maharashtra. However, the video was found to be from Phalodi, Rajasthan. The name of the lady too is not Bhdsale but, Bhawari Devi