Fact Check: The Viral video of mermaid is digitally created

Vishvas News checked the viral post and found that the viral claim of a real mermaid as false. Video has been prepared through editing software, which people are now sharing as real. 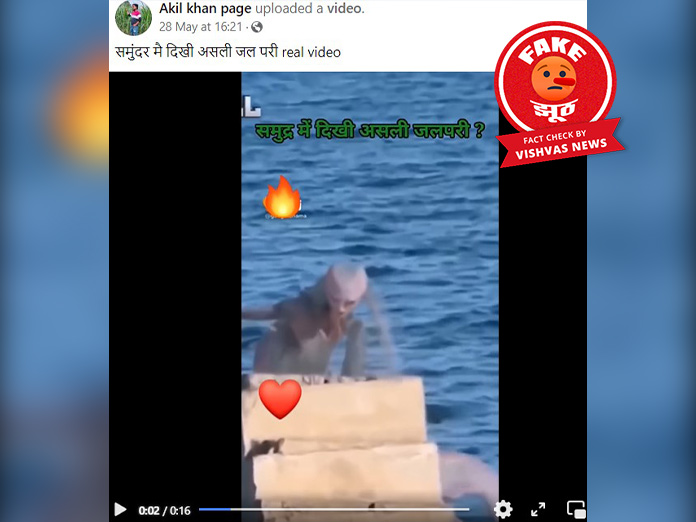 New Delhi (Vishvas News): By sharing a video on social media, it is being claimed that a real mermaid has been sighted in the sea. Vishvas News checked the viral post and found that the viral claim is false. It has been prepared through video editing software, which people are now sharing as real.

Facebook user Sandeep Mycal shared (archived version) this video on 27 may and wrote, “The real mermaid found in the sea.”

To know the truth of the viral video, we extracted several grabs of the video and searched them through Google reverse image search. But we could not find any information related to the viral claim. After this we searched the same grabs using the search engine Yandex. Meanwhile, we found the original video uploaded on the official YouTube channel of ‘JJPD Productions’.

The video was posted on 16 February 2021. According to the information given in the description, the viral video is made for entertainment purposes.

Along with this, it has also been informed that all the pictures shown in the video are fictional and made by CGI.

We found another video uploaded related to a viral claim. It was uploaded on 25th July 2021. In the video, graphic design is seen teaching how the viral video can be created using software.

For more information, we got in touch with graphic design expert, Om Prakash. We shared the viral video with him. He told us that the viral claim is false. The video was created using software. This is not a real video.

In the last step of investigation, we did social scanning of Facebook user Sandeep Mycal. During this we found that the user has 4575 friends on Facebook. As per the information given on the profile, the user is a resident of Uttar Pradesh.

Conclusion: Vishvas News checked the viral post and found that the viral claim of a real mermaid as false. Video has been prepared through editing software, which people are now sharing as real.