Fact Check: A video of a boy dancing from Barmer claimed to be that of Indra Kumar Meghwal

Vishvas News found in its investigation that the child dancing in the viral video is not Indra Kumar Meghwal, a student of Jalore, Rajasthan. The video is of another student, Harish Bheel, a resident of Barmer. 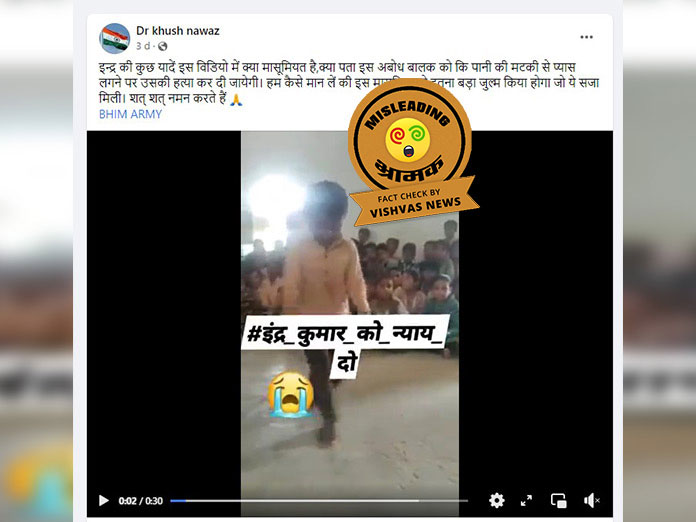 Facebook user Dr. Khush Nawaz shared this video and wrote in the caption in Hindi, “Some memories of Indra, see in the video what is innocence, this innocent child doesn’t know that he will be killed after he drinks water from pot. It is very hard to believe that this poor and innocent child got such brutal punishment. Hundreds of salutes.”

We started searching on Google with related keywords. We found a tweet related to the claim on a Twitter account named Brilliant India. According to the caption, the child seen in the viral video is Harish Bheel, a student living in Barmer, Rajasthan.

Based on the information received, we started searching on Facebook with related keywords. We found the same video uploaded on a Facebook page named GUPS Gomrakh dham Taratra, Chohtan, Barmer. It was shared on 30th July 2020. According to the caption, the child seen dancing in the video is not Indra Kumar Meghwal, but Harish Bheel, another student living in Barmer, Rajasthan.

For confirmation, we contacted Tukraj Bhati, the teacher of Gomrakh Dham Taratra School. He told us that, “the viral claim is false. The name of the child is Harish Bheel and he studies in class second. This child is a resident of Taratara area. This video is from 30th July. Actually, ‘No Bag Day’ is celebrated every Saturday in our school, in which Harish participated and danced. This child is absolutely fine, the child also participated in a program on 15th August.”

In the last step, we did social scanning of Dr. Khush Nawaz, the user who shared the viral claim. From scanning we came to know that the user is influenced by an ideology. According to the information given on the profile, the user is a resident of Uttar Pradesh.

Conclusion: Vishvas News found in its investigation that the child dancing in the viral video is not Indra Kumar Meghwal, a student of Jalore, Rajasthan. The video is of another student, Harish Bheel, a resident of Barmer.