Vishvas News in its investigation found that the post which claimed Mallika Sherawat has written a book is fake. She did not write a book titled, ‘Old Peacemaker Lord Buddha’ and neither was its foreword written by former US President Barack Obama. 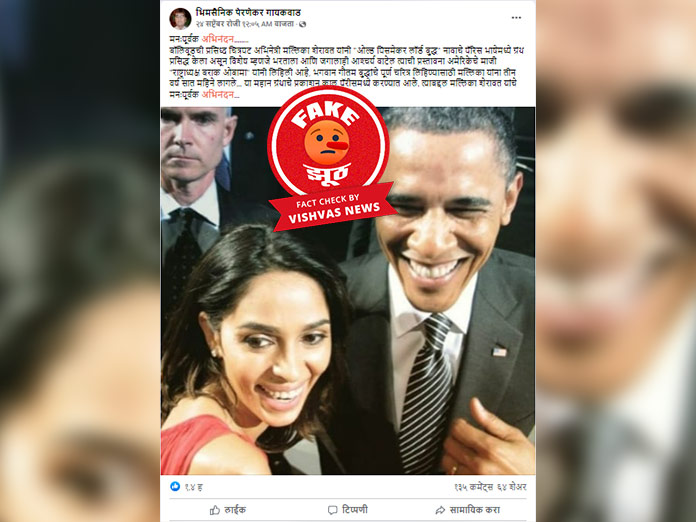 New Delhi (Vishvas News): Vishvas News came across a post being widely shared on Facebook and WhatsApp in Marathi stating that Bollywood actress Mallika Sherawat has written a book titled, Old Peacemaker Lord Buddha. Vishvas News in its investigation found the viral claim to be fake.

Translation: Heartfelt congratulations….
Bollywood’s famous film actress Mallika Sherawat has published a book in Paris language called “Old Peacemaker Lord Buddha” and especially to the surprise of entire India and the world, the foreword is written by the former President of America “Barack Obama”. It took three years and seven months… to complete the book. This great book was published yesterday in Paris. Congratulations to Mallika Sherawat.

The first trigger in the viral message was that it was claimed in the message that the book is written in ‘Paris’ language. The language spoken in Paris is French, so the book could have been in French.

Also, we did not find any book titled, ‘Old Peacemaker Lord Buddha‘ on any of the platforms.

We also checked for news, if Mallika Sherawat had published a book recently.

We could not find any news that stated Mallika Sherawat has written a book.

We also checked for the picture being shared with the viral message.

Mallika Sherawat had shared this selfie with the then US President Barack Obama and wished him on his birthday.

We found this selfie on her Twitter profile too, shared on 11 January, 2016.

In the last step of investigation we connected with senior Bollywood journalist from Mumbai, Parag Chapekar, who tried to connect with Mallika Sherawat on phone, but apparently could not reach her. He reached out to close aides of Mallika Sherawat they informed Chapekar that the viral claim is false. Mallika Sherawat has not written a book titled, ‘Old Peacemaker Lord Buddha’.

Finally we did a social background check of the user who shared the claim, Vishvas News came to know that भिमसैनिक पेरणेकर गायकवाड is a resident of Mumbai and has 1.4K friends on Facebook.

Conclusion: Vishvas News in its investigation found that the post which claimed Mallika Sherawat has written a book is fake. She did not write a book titled, ‘Old Peacemaker Lord Buddha’ and neither was its foreword written by former US President Barack Obama.