Fact Check: Aftab Ameen Poonawala, accused in Shraddha murder case, is a Muslim and not a Parsi

The claim about the religious identity of Aftab Amin Poonawalla, the accused arrested in the Shraddha murder case, is false. Aftab Poonawalla is a Muslim and not a Parsi, as is claimed on social media. 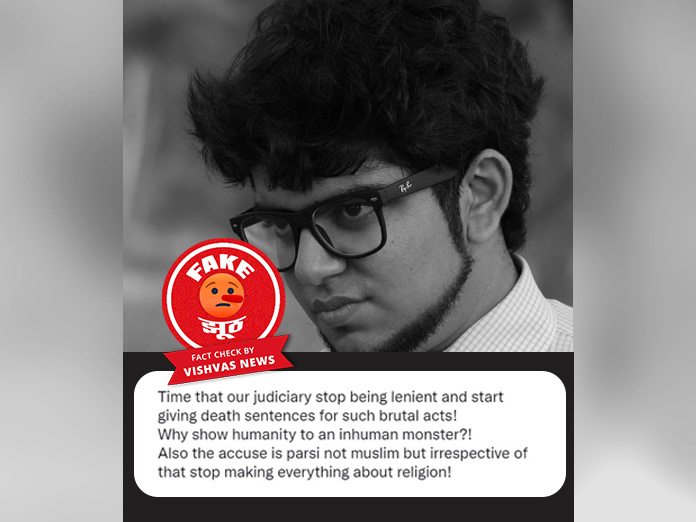 New Delhi (Vishvas News): After the arrest of Delhi’s Shraddha murder case accused Aftab Ameen Poonawalla, several such posts are going viral on social media, claiming that the accused Poonawalla belongs to the Parsi community. Many other users claim that the accused belongs to Sindhi and other communities.

Facebook user ‘Samshad Mallick’ in his post (archived link), shared an old picture of Shraddha and Aftab, describing the accused youth as a Parsi. He has written, “What is there in the name? Keeping the Muslim name was also a conspiracy of Jews against Islam!! If your name is Aftab.

Ahead is Ameen, Poonawala is also there, he will not be seen. As Firoz was, Firoz is and Firoz will remain. This is mentioned in the name. He is a Parsi, but no one will pay attention to it, Aftab is fine for Godi media to set fire! The fire won’t light appropriately if his name is mentioned in front of him, will it?”

Another user described both the deceased and the accused as Parsis in his post. On Twitter, other users also described the accused youth as Parsi. Twitter user ‘Yedz’ tweeted that the accused in the Shraddha murder case is a Parsi and not a Muslim.

According to Dainik Jagran’s November 15 report, Shraddha murder accused Aftab Poonawalla was taken by the police to Mehrauli forest, where he allegedly dumped Shraddha’s body parts. Also, the police have called common friends of Shraddha and Aftab for questioning. According to reports, Shraddha’s father has demanded capital punishment for the accused.

Police busted the murder case in Chhatarpur, Delhi and arrested the accused youth on Monday. Vishvas News saw the of a copy of the FIR registered in this matter. According to the FIR (number-0659) registered at Mehrauli police station in South Delhi, the accused youth Aftab Amin Poonawala is a Muslim, and the deceased girl belongs to the Koli caste of Hindu religion.

The accused, Aftab Ameen Poonawalla, who goes by the name ‘thehungrychokro’ (archive link) on Instagram, has described himself as a Muslim while commenting on a post here. In a comment about 422 weeks old, he wrote, “@zloymom I am a Muslim, and the other term is that you are a Hindu. Lord Krishna is the God of the Hindus. May I ask why these doubts about my religion?”

On being contacted, Dainik Jagran correspondent Arvind Dwivedi, who covered this case in Delhi, also confirmed that the accused is a Muslim.

The family of the accused youth lives in Palghar, Mumbai. So, Vishvas News contacted Dainik Jagran’s Mumbai bureau chief Omprakash Tiwari for additional information. He quoted neighbours of the accused’s family in Vasai to confirm that he was a Muslim (Khoja) and not a Parsi.

It is clear from our investigation that Shraddha murder case accused Aftab Ameen Poonawalla is a Muslim and not a Parsi as claimed by users on social media. According to news reports, Delhi Police is preparing to seek details of Aftab’s profile from the dating app during the case investigation.

On social scanning, we found that Shamshad Malik, the user who shared the viral post with the false claim, is followed by over 5,000 people on Facebook.

Conclusion: The claim about the religious identity of Aftab Amin Poonawalla, the accused arrested in the Shraddha murder case, is false. Aftab Poonawalla is a Muslim and not a Parsi, as is claimed on social media.