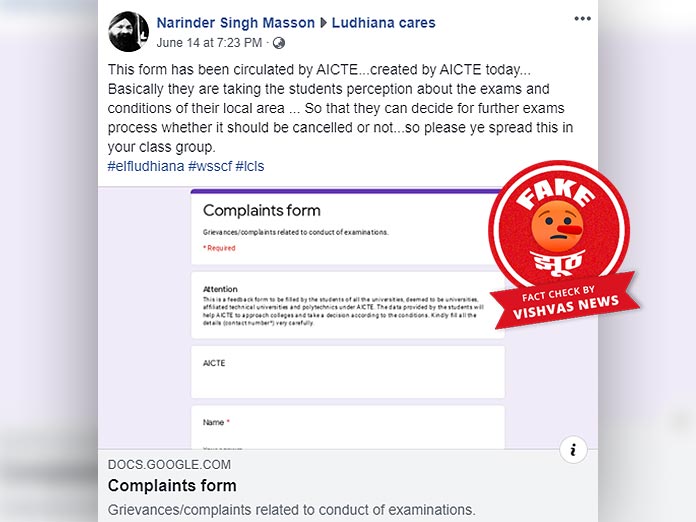 New Delhi (Vishvas News): A viral post on social media claims AICTE has created and circulated a form in which they are taking the student’s perceptions about the exams and conditions of their local area. Vishvas News investigated and found that the viral post is fake. AICTE has not issued any such form.

The post doing rounds on Facebook along with the form reads: “This form has been circulated by AICTE…created by AICTE today… Basically they are taking the students perception about the exams and conditions of their local area … So that they can decide for further exams process whether it should be cancelled or not…so please ye spread this in your class group.” The archived version of the post can be read here.

Vishvas News contacted Lt. Col. Kailash Bansal who is the Director-Media Relations at AICTE. We asked him regarding the viral post. He said: “This is fake. AICTE has not issued this google form. This is a spam. People should not enter their details.“

On June 5, 2020, AICTE tweeted that: Students are forwarding grievances related to conduct of semester exams. AICTE has already endorsed UGC guidelines for its approved institutions. Aggrieved students to address their concerns to university bodies who shall take judicious call based on the prevailing local situations.

But, there was no Google form released by AICTE as mentioned in the viral post. Instead, aggrieved students had been asked to address their concerns to university bodies.

The viral post was shared on Facebook by a user named Narinder Singh Masson. We scanned the social profile of the user and found that the user is based out of Ludhiana, Punjab.

Conclusion: No, AICTE is not conducting online survey related to university exam. The viral post is fake.