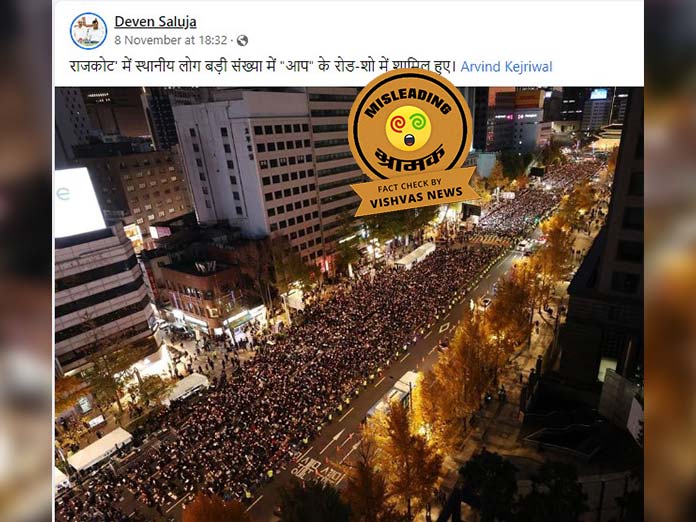 Now a picture related to this public meeting is becoming increasingly viral on social media. Hundreds of people are seen walking on the road in the picture. By sharing this picture, it is claimed that it is from Arvind Kejriwal’s rally.

The viral claim turned out to be misleading in the investigation by Vishvas News as the picture has nothing to do with Kejriwal’s rally. The viral picture is of a candlelight march in South Korea, which is now being shared on social media with the wrong claim.

Other users on social media shared similar claims with this post. The archived version of the post can be viewed here.

To know the truth of the viral claim, we searched for the photo through Google reverse image and found the exact picture in Korean Times. The report was published on November 5, 2022. According to the information given in the report, a stampede broke out after a huge crowd gathered on Halloween, and 156 people lost their lives in the accident. A candlelight march was taken out to tribute to those killed in the accident. This picture is from that march.

During the investigation, we found a viral video uploaded on a YouTube channel named No Comment TV. The exact scene of the viral picture can be seen at 4 seconds in the video. According to the information, this video shows a candlelight march taken out in South Korea.

Taking the investigation forward, we started searching about Kejriwal’s rally. According to a report published in Jansatta on November 6, 2022, Kejriwal held a rally in Gujarat on the same date. Kejriwal had held rallies in Wankaner, Surendranagar and East Rajkot, while the viral picture is from November 5.

For more details, we contacted Gujarat Dainik Jagran Deputy Editor Rajendra Singh, who told us that the viral claim was false. This picture is not from Gujarat.

We scanned the profile of Facebook user Deven Saluja, who shared the image with a misleading claim. The user has more than six thousand friends on Facebook. According to the information given on the profile, the user is a resident of Delhi.