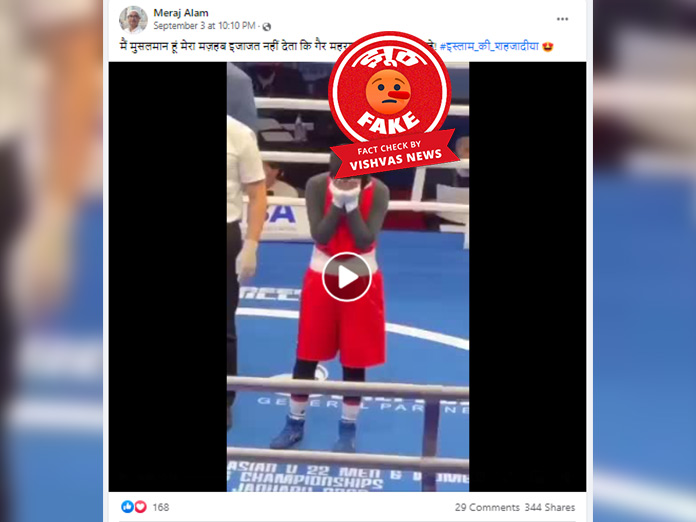 New Delhi (Vishvas News). A video of a female boxer wearing a hijab is going viral on social media in which she can be seen stopping the referee from holding her hand. This video is being shared with the claim that the female boxer did not allow the referee to hold her hand because she is a Muslim. This claim turned out to be false in the investigation of Vishvas News. The video going viral is clipped. In the full video of this match, it can be seen that a few seconds after this clip, the boxer let the referee hold her hand.

Sharing the viral post (archive link), Facebook user ‘Meraj Alam’ wrote, “I am a Muslim, my religion does not allow any other man to hold my hand! #Islam_ki_shehzadiya”

In the viral video, Asiad U 22 Men and Woman can be seen written on the boxing ring. When we searched the keyframes of this video on Google reverse image with keywords, we found the full video of this match uploaded on a YouTube channel named SPORT LIVE. This scene can be seen at 3:00 in this 3:42 second video. Initially the Uzbek players does not allow the referee to hold their hand, but at 3:14 seconds she allows him to hold her hand. After this, Uzbek players also go to the coach and high fives him.

In a boxing match, the winner is announced by the referee by raising his hand at the end. This is decided by the collective points the judges give. However, we did a search and found videos of matches where the referee, instead of raising the player’s hand, declared the winner by raising his own hand in their direction.

Regarding this video, Viplav, Sports Head, Dainik Jagran Digital says, “The female boxer was pulling it back when the referee grabbed her hand due to the reaction to the defeat after the match. Later she let him hold her hand. The boxing bout is decided by five judges together. Sometimes the players performing well are not able to hit the right punch but they are sure of victory while the judge declares the opponent as the winner on the basis of the correct punch. Afterward, the referee holds the hands of both boxers because the winner is not known. When the winner’s name is called, the referee raises the boxer’s hand and declares his victory.