The claims that ‘drinking one glass of water before bed prevents heart attacks’, and that ‘individuals who take aspirin to prevent heart attacks should do so at night for better results’ are unproven and inaccurate. 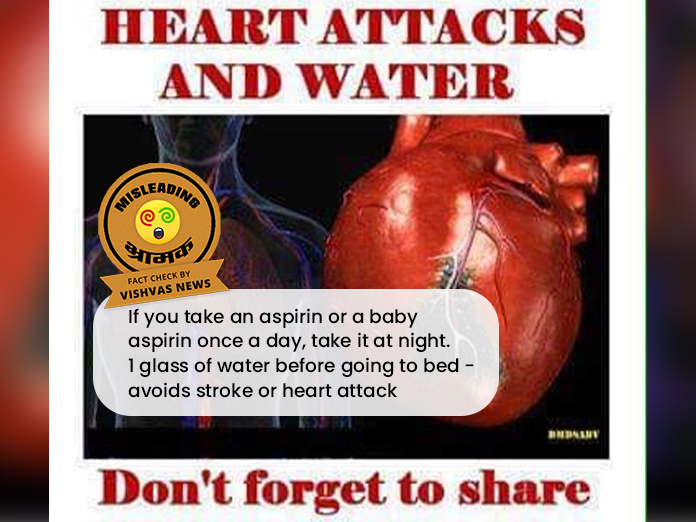 New Delhi (Vishvas News): India has one of the highest burdens of cardiovascular disease (CVD) worldwide. It is reported, in accordance with the World Health Organization, India accounts for one-fifth of these deaths worldwide, especially in the younger population.

In such a situation, any misinformation can be catastrophic to cardiovascular patients and others. A viral post on Facebook claims that drinking one glass of water before bed and taking daily aspirin can prevent heart attacks. Vishvas News, in its fight against misinformation, has debunked all heart health myths perpetuated in the Facebook post.

Vishvas News first did an open search on Facebook with the keywords – ‘Heart Attacks and Water’ – and found several identical claims like this, this and this, dating back to 2013, confirming that this is not the first time the claim is going viral.

The viral post features a photo of a heart and claims that drinking water at specific times of the day will help lower the risk of some diseases. It also details the role of aspirin in heart attacks. On analyzing the post step-by-step, Vishvas News was able to debunk many misleading claims in the viral message.

The initial part of the post’s caption – 1 glass of water before going to bed – avoids stroke or heart attack – includes myths associated with water intake and heart attacks.

Dr Rajeev Jayadevan, MD, DNB, MRCP (UK), ABIM (Medicine, New York) and a former president of the Cochin Chapter of the Indian Medical Association states that the viral post is baseless and inaccurate. “Drinking enough water is important for vital body functions, the requirement varies according to factors such as ambient temperature, exercise, humidity, and rate of fluid loss from the body. It is common for people to make all sorts of claims about water-drinking habits, often threatening dire health consequences if they don’t. Drinking too much water is not going to improve health, and can even result in potentially dangerous electrolyte abnormalities.”

“The reason for people to wake up at night to pass urine is many. The Facebook post claims it is due to gravity, but that mechanism applies only to those who have swollen legs from edema from conditions such as heart failure. When such a person lies down flat, it is true that some of that fluid – that’s outside the blood vessels – gets back into the blood circulation, and this excess gets filtered out by the kidneys. But most healthy people do not have this problem,” he added.

He further said that, “The main reason people wake up at night to pass urine is that they drink extra water or other fluids closer to bedtime; a simple rescheduling of water intake can fix this. Those who take a salty snack or excessive salt at dinner will end up making more urine to put all that sodium out. The same is the case with taking diuretic pills.

Another reason among some men is that the prostate gland begins to enlarge after age 40 and this becomes more common as they get older. This leads to incomplete bladder emptying. Thus it is easy for even a small additional amount of urine reaching the bladder at night to give a sensation of fullness, somewhat like adding water to a glass that is already half full. Other reasons include conditions such as diabetes, infections, sleep apnoea, and overactive bladder.”

Dr. Jayadewan also shared a research article titled – The Prevalence and Causes of Nocturia – for better insights. Conclusions drawn from the study point out – “Nocturia is common across populations. It is most prevalent in older people but it also affects a significant proportion of younger individuals. Clinicians should be alert to the possibility that nocturia may impact the sleep, quality of life and overall health of their patients. Since the condition is highly multifactorial, frequency-volume charts are invaluable tools for the diagnosis of underlying factors and for treatment selection.”

While debunking the next segment about Heart attacks and intake of aspirin daily, Dr. Madhu Sreedharan, Consultant Cardiologist, Trivandrum, Kerala shared quite valuable inputs. He said, “This is misleading. Water has no relationship to heart attacks. 1.5 – 2 litres of water per day is adequate for the vast majority (unless working in hot/humid conditions). Aspirin has no role in the primary prevention of heart attack – which means a person who has not had a heart attack need not / should not take it. Aspirin does cause excess bleeding and any possible benefits of reduction in heart attack is offset by the excess bleeding risk. If you are having a heart attack (sudden chest pain), taking aspirin would help – but more importantly, try to get to a hospital as early as possible.”

This article titled – Mythbusters: Will Drinking Water Help With…? also holds a segment that mentions:

He pointed out that medical misinformation is a big challenge to combat and everyone needs to be aware of the facts. “Don’t just blindly follow the myths; aspirin and other medicines should only be taken after the right guidance from your doctor.”

Dr Mukesh Goyal, Senior Consultant Cardiovascular Surgery, Apollo Hospital, Delhi-Mathura Road also shared his restricted views about the usage of daily use of aspirin. He insinuated, “It is to be taken only if advised by a physician. It’s best to visit a hospital emergency rather than self-medicating and risking your life.”

Shockingly, the viral post also borrowed the authority of a real person, Dr. Virend Somers of the Mayo Clinic, a US nonprofit health organization, in order to back up its claims. However, on the detailed investigation, Vishvas News found this post from the Clinic that rubbished all the claims that possibly went viral in an email format too.

Dr Somers also refuted claims in an article published in St Lewis American newspaper on February 12, 2014. Dr. Somers did contribute to a study published in the July 29, 2008 issue of the Journal of the American College of Cardiology, but the study makes no mention of water or aspirin as key to preventing heart attacks.

Because the post also has claims about 911 (Emergency number for the US) and aspirin, Vishvas News contacted renowned Dr Harvinder Sahota who is an Indian American cardiologist based in Los Angeles. Notably, he is the inventor of the FDA-approved Perfusion Balloon Angioplasty known as ‘Sahota Perfusion Balloon’.

Speaking to Vishvas News he disregarded the viral medical misinformation and replied via message, “First of all, getting up during the night to urinate might be due to Diabetes or Prostate. During a heart attack taking an aspirin is helpful if there are no contraindications. The best advice I can give is to find a good cardiologist and let him examine and do the appropriate testing.”

Also, every government-authorised body will ask you to rush to a nearby hospital and not to your neighbours in case of any emergency; and no amount of shares on a social media post can actually save a dear member.

On performing social scanning, Vishvas News found that the Facebook user lives in Manila, Philippines, and has 195 followers.

Conclusion: The claims that ‘drinking one glass of water before bed prevents heart attacks’, and that ‘individuals who take aspirin to prevent heart attacks should do so at night for better results’ are unproven and inaccurate.