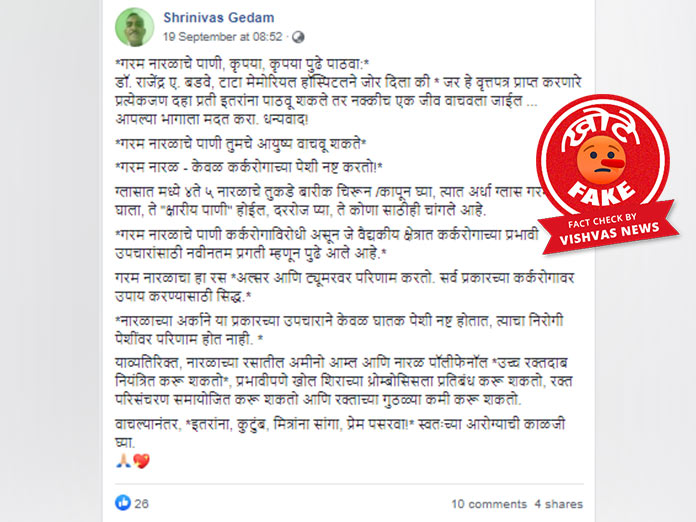 New Delhi (Vishvas News): Vishvas News came across a post on various social networking sites in Marathi, which claimed that drinking hot coconut water can kill the cancer cells. The post was attributed to Dr Rajendra Badwe of Tata Memorial Hospital. Vishvas News in its fact check found the post to be fake. Earlier too, Vishvas News had done a fact check on the same claim which went viral in English.

Facebook user Shrinivas Gedam posted on his profile a message in Marathi on 19 September. The message in Marathi said that Dr Rajendra Badwe of Tata Memorial Hospital has appealed that if this message is circulated among at least ten people, it could save someones life. Hot coconut water can save one’s life. The post also mentioned the procedure to consume the coconut water.

Investigation:
Vishvas News started the investigation by simple keyword search, we searched whether the doctor Dr Rajendra Badwe has given any such statement, even at some event.

We found out that the news is being shared on the internet since 2019.

Hindustan Times had carried the report and also Times of India.

The staff informed that the Doctor has not given any such statement on cure of cancer or killing of cancer cells. The fake post is viral on internet since 2019.

Vishvas News earlier in the year 2019 had conducted a fact check on the same post which went viral in English.

In the last step of investigation we conducted a social background check of the Facebook user Shrinivas Gedam who shared the post. We found out that Shrinivas Gedam is a retired employee of Bhartiya Jeevan Bima Nigam.