Fact Check: Fake post getting viral in the name of Virat Kohli 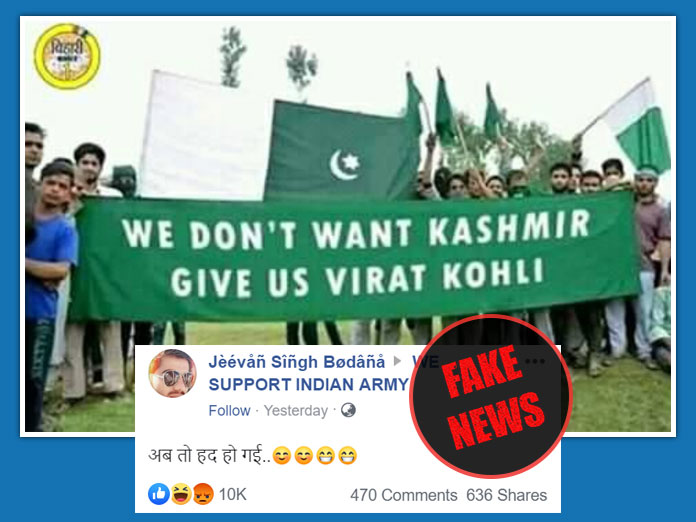 A post is getting viral on social media in which some people could be seen holding a green-colored banner. The banner has a text written on it: WE DON’T WANT KASHMIR GIVE US VIRAT KOHLI. Vishvas News investigated and found that the viral photo is photoshopped.

The photo is getting viral on social media in which some people could be seen holding a banner. The text written in the banner reads: WE DON’T WANT KASHMIR GIVE US VIRAT KOHLI. Many people sharing the post are claiming that the people shown in the image are from Pakistan.

The fake post has been uploaded on Facebook by a user named Jeevan Singh Bodana on June 18, 2019. The post has been shared by 600 users so far and 470 users have commented on the post. This post has also been shared on other social media platforms.

We started our investigation by performing Google Reverse Image search of the viral photo. We found similar images on many websites.

We scanned each page and found the original image on the website of India Today. We found the image on an article that was uploaded on August 8, 2016. The text written on the green-colored banner read: WE WANT AZAADI. The original photograph is from the 2016 Kashmir unrest which took place after the killing of Hizbul commander Burhan Wani. The original banner used by the protesters said: We Want Azaadi.

We contacted Mr. Rahul Sharma, Senior Correspondent, Dainik Jagran who is based out of Jammu. He told us that the viral photo in the name of Virat Kohli is fake. Some miscreants have photoshopped the original image and had made it viral.

We then scanned the Facebook profile of Jeevan Singh Bodana who shared the fake post. Jeevan Singh is based out of Jaora, Ratlam, Madhya Pradesh.

Vishvas News investigated and found that the post getting viral in the name of Virat Kohli is photoshopped. In the original image, people are asking for freedom, not Virat Kohli.