In the investigation of Vishvas News, the viral claim about the screenshot of Ravish Kumar’s tweet turned out to be false. No such tweet has been made by Ravish Kumar. 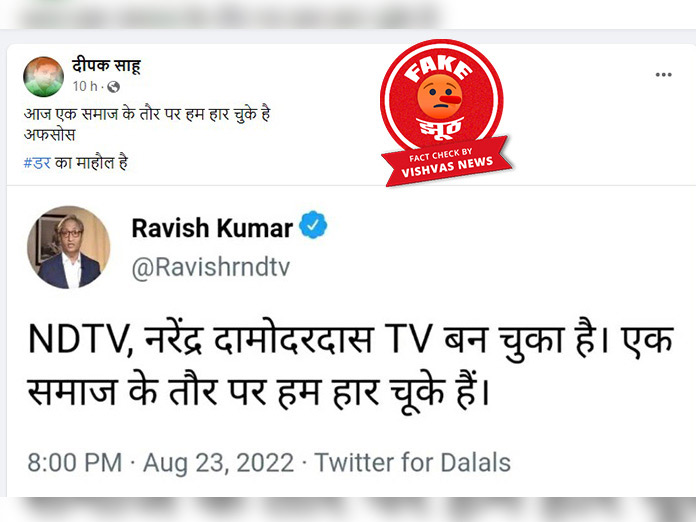 New Delhi (Vishvas News): Amidst the news of the Adani-NDTV deal, a screenshot of a tweet in the name of Ravish Kumar is going viral on social media platforms. In the screenshot, it has been written that NDTV has become Narendra Damodardas TV. As a society we have lost. People on social media are claiming that Ravish Kumar tweeted this. In the investigation Vishvas News found that the claim is fake. Ravish Kumar himself has also confirmed that he has not tweeted such a thing.

Facebook user Deepak Sahu shared the viral screenshot and wrote, “Today as a society we have lost…

To know the truth of the viral claim, we started scanning the official Twitter account of Ravish Kumar. During this we did not find any such post there.

For confirmation we reached out to Ravish Kumar. He told us that the viral claim is false. I haven’t tweeted anything like this. Viral screenshot is fake.

We scanned the profile of ‘Deepak Sahu’ who shared the false claim. According to the information given on the profile, the user is a resident of Madhya Pradesh. He has been active on Facebook since November 2012. 4,068 people followed him on facebook.

Conclusion: In the investigation of Vishvas News, the viral claim about the screenshot of Ravish Kumar’s tweet turned out to be false. No such tweet has been made by Ravish Kumar.