Fact Check: Fake warning getting viral in the name of Indian Oil 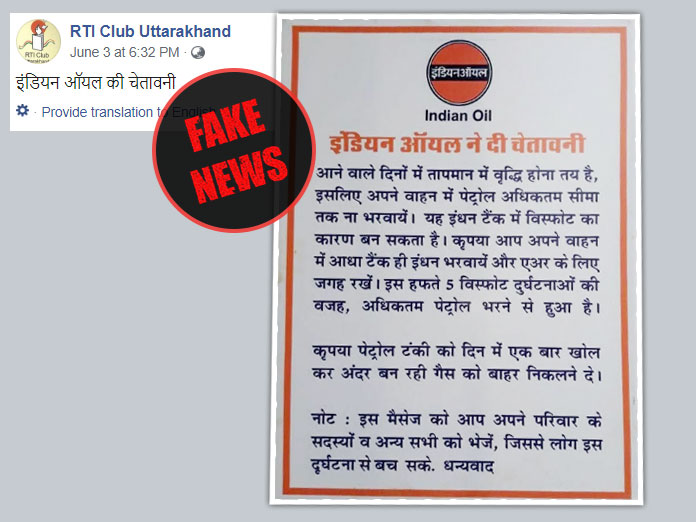 A fake message in the name of Indian oil is getting viral across social media. In the viral message, Indian Oil is alleged to have issued a warning that suggests, due to an increase in temperature do not fill excess of petrol in your vehicle. Otherwise, an explosion can happen. Vishvas team investigated and found that the viral message is fake. Indian Oil did not give any such warning.

A Facebook page named ‘RTI Club Uttarakhand’ has uploaded the viral message. The message has also been shared by various users on Facebook, Twitter, and Whatsapp. The viral message reads: In the coming days, the temperature is expected to increase. This can cause an explosion in fuel tanks. This week, 5 explosion accidents happened due to excessive petrol.

Vishvas News team started its investigation by visiting the website of Indian Oil, iocl.com. We saw an announcement on the homepage. It stated: “There are rumours in social media that Indian Oil has given a warning to the following effect: Due to increase in temperature please don’t fill petrol to the maximum limit of the tank; it will cause an explosion in the fuel tank. Indian Oil would like to disown this statement.” Indian Oil further clarified that: “Automobile manufacturers design their vehicles considering all aspects of performance requirements, claims, and ambient conditions with built-in safety factors. The maximum volume specified in the fuel tank for petrol/diesel vehicles is no exception. It is, therefore perfectly safe to fill the fuel in vehicles up to the full limit (max.) as specified by the manufacturer irrespective of winter or summer.”

We contacted the head office of Indian Oil. We were told by an official that the post is fake and has been shared multiple times across social media. There is no truth in it.

We performed social scanning of the Facebook page ‘RTI Club Uttarakhand’ which shared the claim. The page has 2248 followers.

Vishvas News team investigated and found that the viral warning in the name of Indian Oil is fake.