We found in our investigation that this video has actually been tampered with. Voice over has been added to the video. Gorakhpur Police has also clarified that no such child thief or organ trafficking gang is active in Gorakhpur. 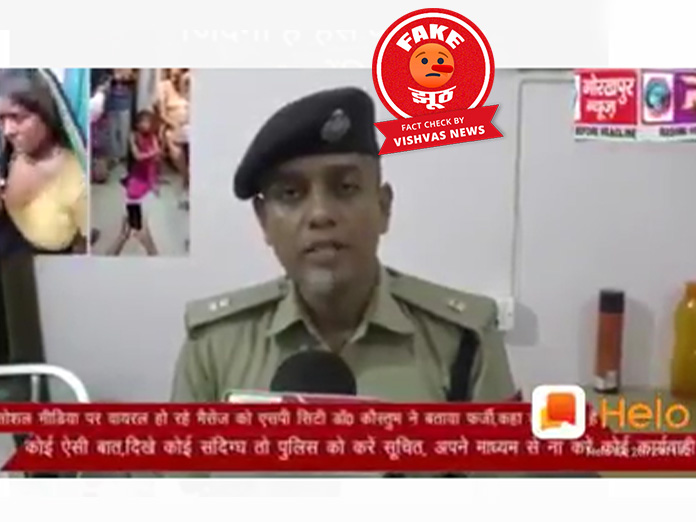 New Delhi (Vishvas News). A video is going viral on WhatsApp, in which a police officer can be seen. The background voice-over in the video says, “Do not open the doors for any garbage collector, sadhu, hawker and beggar. Just drive them away. Don’t even say by mistake that there is no one in the house, come later. … beware. Released in public interest, Gorakhpur Police.” Vishvas News found in its investigation that this video is actually edited. Voice over has been added to the video.

Vishvas News received a video on its chatbot number +91 95992 99372, in which the user asked us to check the truth behind this video. A police officer can be seen in the viral video. The background voice in the video says, “Do not open the doors for any garbage collector, sadhu baba, hawker and beggar. Just make noise and drive them away. Don’t even say by mistake that there is no one in the house, come later. If you have a pet dog in the house, set it free. Do not open the main door. Take care of yourself and your children. Be alert and be safe. Today such news has come from Bargadwa that 500 people have come in the form of beggars. They have taken some hostages along the way and sell their hearts and kidneys. Around 6-7 people have been apprehended and they have admitted that 500 people are out. Send this message to all your friends and family members. Please be safe. A group of 15-20 people has come, women and children are also with them. They also have weapons. They come in the middle of the night and there is the sound of children crying. Please don’t open your doors and share in maximum groups. This message should be viral in 2-3 days. Your safety is in your hands. Beware. Released in the public interest, Gorakhpur Police.”

To investigate this video, we first checked this video properly. The Gorakhpur News logo is on top of the video. The scroll running down the video reads, “SP City Dr Kaustubh rubbished the messages going viral on social media as fake. Said- If you see any such message, inform the police and don’t take the law into your own hands.” The audio of the video and the message below is exactly the opposite. Also, most of the videos don’t have lip-sync. We suspected that the video might be fake.

After this we extracted the keyframes of this video with the help of InVid tool and then searched them on Google reverse image with keywords like “Gorakhpur News+SP+Beggars”. We came to know that this video is viral on social media since 2019.

We then used the Time Tool and searched the news of 2019 with these same keywords. In the search, we found a video of 2 minutes 35 seconds uploaded on the YouTube channel of Gorakhpur News on 24th August, in which an anchor, while starting the program, says that Gorakhpur SP (CITY) Dr Kaustubh has spread warning on social media about child theft. The message received is said to be fake. After this, the anchor reads the viral message on social media and after the message says that this is what Gorakhpur SP Dr Kaustubh has to say on this message. After this, in the video, a reporter asks SP Kaustubh about this message, on which SP Kaustubh says that this news is completely fake. If anyone comes across any such information, they should immediately inform the police.”

In connection with this viral video, we also spoke to Hanuman Singh Baghel, editor of Gorakhpur News, who told us that a video aired on his YouTube channel is being tampered with, removing the beginning and end parts and changing the audio. This is the work of mischievous elements.

We also contacted Dainik Jagran’s Gorakhpur reporter Pradeep Srivastava in this regard. He said, “The video is from 2019. At that time Dr. Kaustubh was the superintendent of police (city) here. Right now his posting is in Maharajganj. At that time this clip was quite viral. Actually, he had given a statement against fake news. Which was later edited and changed.” Pradeep Srivastava also clarified by quoting the police that no such child thief or organ trafficking gang is active in Gorakhpur.

This post was shared with us on Chatbot by our user Saroj Gupta.

Conclusion: We found in our investigation that this video has actually been tampered with. Voice over has been added to the video. Gorakhpur Police has also clarified that no such child thief or organ trafficking gang is active in Gorakhpur.