Vishvas News found in its investigation that this video is not of Amboli falls in Maharashtra but from Gujarat. The video from Gujarat is going viral with a misleading claim. 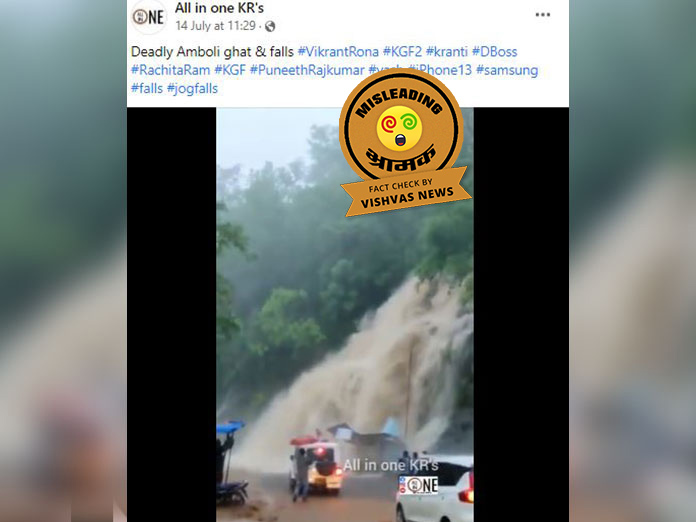 New Delhi (Vishvas News): Due to heavy rains across the country people are facing many problems. A video is being shared by linking this situation, in which a huge waterfall could be seen. While sharing the video, users are claiming that it is Amboli Falls of Maharashtra. Vishvas News found in its investigation that this video is not from Amboli falls in Maharashtra, but from Gujarat. Viral claim is misleading.

Facebook user All in one KR’s’, posted the viral picture on Facebook and wrote, ‘Deadly Amboli ghat & falls’

With the help of the InVid tool Vishvas News first extracted some keyframes of viral videos and searched them using Google reverse image search.

We found the same video on a YouTube channel named Paresh Deshmukh. According to the caption, the video is from Shiv Ghat of Dang district of Gujarat.

We found the same video uploaded on 14th July 2022 on the official Facebook page of ETV Bharat, Maharashtra. The video has been described as Dang district of Gujarat.

While searching with keywords we found a report related to the viral video on ETV Bharat Maharashtra website. It was published on 13 July 2022. According to the news, ‘Gujarat has been receiving heavy rainfall for the last few days. Seven districts of Gujarat have also come under the grip of flood water. Khapri, Ambika, Poorna and Gira and Lokmata waterfalls are now flowing heavily in Dang district. 45 villages are affected by the water of these springs (Dang District Waterfalls). The entire news can be read here.

After searching about Shiv Ghat on YouTube, we found many similar videos. The ghat in the viral video can be seen in News18 Gujarati’s report. It was published on 2 July, 2022.

According to the given headline, ‘Dang district bloomed in the rain, Shiv Ghat waterfalls near Ahwa came alive.

For confirmation, we contacted our Gujarat-based journalist Manish Dubey and shared the viral video with him. He told us that this video is from Dang district of Gujarat.

In the last step of investigation, Vishvas News did a social background check of the Facebook user All in one KR’s page that shared the viral post, we found that 114 people follow this page.

Conclusion: Vishvas News found in its investigation that this video is not of Amboli falls in Maharashtra but from Gujarat. The video from Gujarat is going viral with a misleading claim.