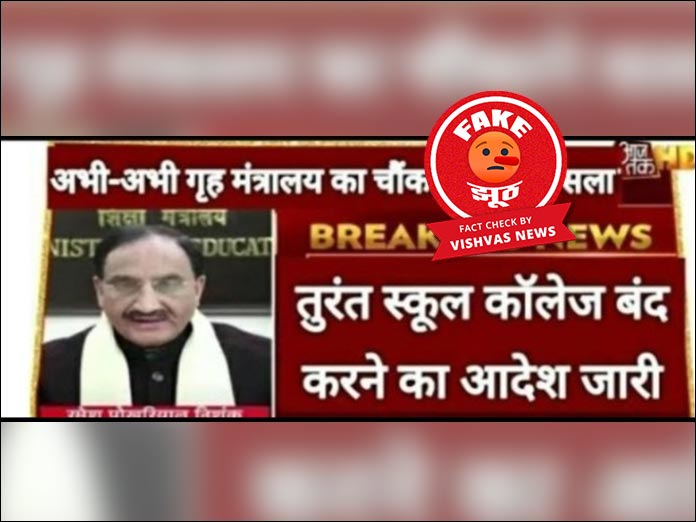 New Delhi (Vishvas News): A post going viral on social media shows a graphic plate of Aaj Tak news channel and is shared with a claim that the Ministry of Home Affairs has ordered the closure of schools and colleges.

Vishvas News investigated and found the viral post to be fake. Also, the graphic plate being used is edited and is falsely attributed to Aaj Tak. Schools and colleges were closed for a long time during the lockdown. The post is going viral using fake claims. Home Ministry has not issued any such order recently regarding the closure of school-colleges as claimed in the viral post.

A graphic plate of breaking news is going viral on social media with the logo of Aaj Tak. A Facebook user named Sitaram Saini has shared one such graphic plate in his post. The post reads: ‘Just In: Shocking decision of the Ministry of Home Affairs. An order issued to immediately close schools and colleges.’

Vishvas News searched the claim on the web using appropriate keywords. We did not find any authentic media reports supporting the claim. If the Home Ministry had taken such a decision regarding the closure of schools and colleges, it would have been big news and media houses would have covered it. Schools and colleges remained closed in the last few months due to increasing cases of coronavirus, but now some colleges have reopened.

Vishvas News contacted the senior producer working in the editorial department of Aaj Tak channel. He said: Aaj Tak has its own font and it cannot be copied. He confirmed that this graphic plate is not from Aaj Tak channel.

Vishvas News contacted Umakant Tripathi, media advisor of Union Education Minister Ramesh Pokhriyal Nishank in this regard. He denied the viral claim regarding the closure of schools-colleges.

Vishvas News scanned the profile of Facebook user Sitaram Saini who shared the viral claim. The information in user’s profile is hidden.

Conclusion: The Ministry of Home Affairs has not ordered the closure of schools and colleges. A fake graphic plate in the name of Aaj Tak is going viral.