Fact Check: In Gurugram dead body in suitcase case, accused and victim belonged to the same community, no communal angle

Vishvas News found the viral claim to be misleading in its investigation. Both the accused and the victim belonged to the same religion. There was no communal angle. 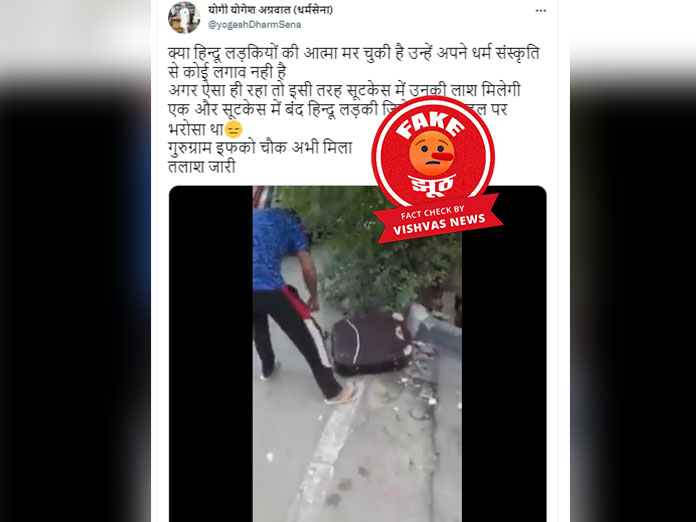 New Delhi (Vishvas News). A 53-second video is going viral on social media where the police can be seen recovering a body from a suitcase. Users are trying to give this case a communal angle by claiming that a Muslim youth killed his Hindu wife. Vishvas News in its investigation found that this claim is misleading. In the incident, both the accused and the girl belonged to the same religion. No communal angle was involved.

Twitter user Yogi Yogesh Aggarwal (Dharmasena) (archive link) posted the video on October 20, writing, “Translation: Have Hindu girls’ souls died, they have no attachment to their religion, culture. These bodies will be found if this continues. Another suitcase Hindu girl who had faith in her Abdul has just been found at Gurugram IFFCO Chowk. Search is on.”

To verify the viral claim, we extracted the keyframe of the video with the help of the InVid tool and searched it with Google reverse image. We found a video report on a YouTube channel named Gurugram News in which viral visuals can also be seen. According to the news, “The mystery of the body of the woman found in a suitcase at Iffco Chowk in Gurugram has been solved by the Gurugram Police within 24 hours. The name of the accused is being told as Rahul.” The video also has a bite of ACP Crime Gurugram, Preetpal Singh, in which he can be clearly heard saying that the name of the accused is Rahul.

In a report of timesofindia.indiatimes.com dated October 20, the same thing was said that the girl’s Name Priyanka while the name of the accused youth is Rahul. According to the news “Two days after the body of a woman was found in an abandoned suitcase at IFFCO Chowk, police have identified her and arrested her husband for the murder. Cops said the couple has been identified as Rahul alias Chhota (22) and Priyanka (21), originally from Uttar Pradesh’s Sultanpur.”

For more confirmation, Vishvas News contacted Sunil Jha, Haryana Digital Incharge of Dainik Jagran. He told us “The viral claim is misleading. In this incident, both the accused and the victim are Hindus. There was no communal angle in the case.”

We scanned the profile of Twitter user Yogi Yogesh Agarwal (Dharmsena) who shared the video with a misleading claim. The user has 2,938 followers.

Conclusion: Vishvas News found the viral claim to be misleading in its investigation. Both the accused and the victim belonged to the same religion. There was no communal angle.