Fact Check: Madhavan did not sell his house to fund the film ‘Rocketry’

This post was found to be fake in the investigation of Vishvas team. Madhavan himself has confirmed that he did not sell his house to fund the film ‘Rocketry’. 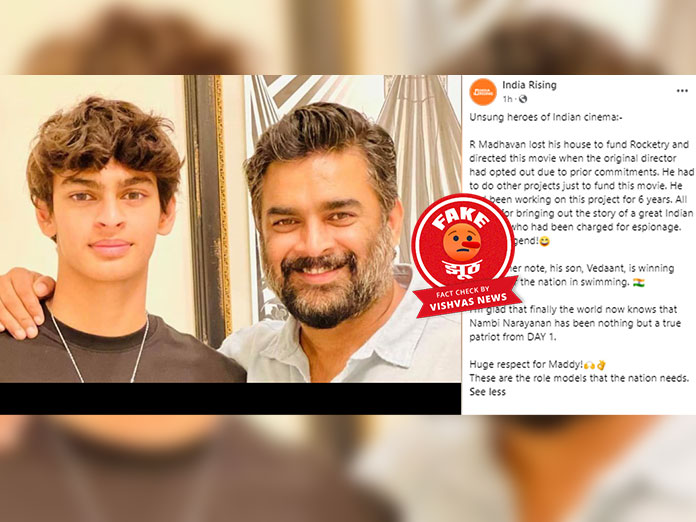 New Delhi (Vishvas News). A text is going viral on social media, in which it is being claimed that actor Madhavan has sold his house to fund the film ‘Rocketry’. This post turned out to be fake in the investigation of Vishvas team. Madhavan himself has confirmed this.

Facebook page ‘India Rising’ uploaded the post, which had a picture of Madhavan and his son. Along with it was written “Unsung heroes of Indian cinema:- R Madhavan lost his house to fund Rocketry and directed this movie when the original director had opted out due to prior commitments. He had to do other projects just to fund this movie. He had been working on this project for 6 years. All of this for bringing out the story of a great Indian scientist who had been charged for espionage. What a legend! On another note, his son, Vedaant, is winning medals for the nation in swimming. I’m glad that finally the world now knows that Nambi Narayanan has been nothing but a true patriot from DAY 1. Huge respect for Maddy! These are the role models that the nation needs.”

The archive link of the viral post can be seen here.

To start our investigation, we first did a keyword search. We could not find any news anywhere that said that Madhavan had sold his house.

However, we did find a tweet on the verified Twitter handle of Actor Madhavan which read “Oh Yaar. Pls don’t over patronize my sacrifice. I did not lose my house or anything. In fact all involved in Rocketry will be very proudly paying heavy Income Tax this year. Gods grace. We all made very good and proud profits. I still love and live in my house.” Which translates in Hindi as “Please don’t overestimate my sacrifice. I haven’t lost my house or anything. In fact all the people associated with rocketry will pay huge income tax this year with great pride. God’s grace. We all have Made a very good and proud profit. I still live in my house.”

We also reached out to senior entertainment journalist Parag Chhachekar in this regard. He also confirmed that Madhavan’s house has not been sold to fund ‘Rocketry’.

Now let’s talk about the rest of the claims being made in the post. It is true that the film’s original director Ananth Mahadevan left the film due to ‘inevitable circumstances’ after which the film was directed by Madhavan himself. As far as the matter of his son Vedant winning a medal for the country in swimming, it is absolutely true that Vedant has won international medals in swimming. At the Danish Open in Copenhagen held in April 2022, Vedanta won a gold in the men’s 800m freestyle and a silver in the 1500m freestyle event.

Finally, we did a social scanning of the profile of the Facebook user India Rising, who made the fake post viral. This page has 921,811 followers.

Conclusion: This post was found to be fake in the investigation of Vishvas team. Madhavan himself has confirmed that he did not sell his house to fund the film ‘Rocketry’.