Fact Check: Makers of ‘The Kashmir Files’ did not donate Rs 200 Cr to PM fund, viral claim is fake

Vishvas News in its investigation found that the viral claim stating that the makers of The Kashmir Files donated Rs 200 crore is fake. 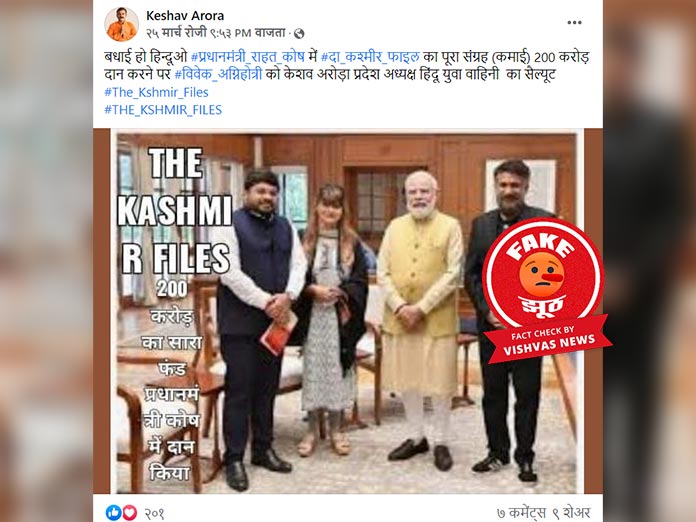 New Delhi (Vishvas News): Vishvas News came across a post going viral on various social media platforms, which claimed that the makers of movie The Kashmir Files have donated Rs 200 crore to the PM fund. Vishvas News in its investigation found the claim to be fake.

In the post the makers of the movie could be seen along with Prime Minister Narendra Modi.

We found the picture on the verified handle of ANI digital.

The tweet nowhere mentioned a donation of Rs 200 Crore to the PM fund.

We also found a news report by Jagran, where it stated the The Kashmir Files had entered the Rs 200 crore club becoming the highest-grossing Hindi film in the pandemic. But, nowhere in the report was it mentioned that the makers are donating the amount to the PM fund.

We also checked the social media profiles of the movie director, Vivek Agnihotri, who too hadn’t shared anything similar to the claim.

In the next step of investigation, Vishvas News reached out to the personal assistant of Vivek Agnihotri, Amit Katwal, who denied the claim and confirmed that no such donation was done by the makers of the movie.

In the last step of investigation we, did a social background check of the user who had shared the information, Keshav Arora is a social worker from Rajasthan and is followed by 4,031 people.

Conclusion: Vishvas News in its investigation found that the viral claim stating that the makers of The Kashmir Files donated Rs 200 crore is fake.