Fact Check: Message being spread in the name of the Prime Minister Mudra Yojna is wrong 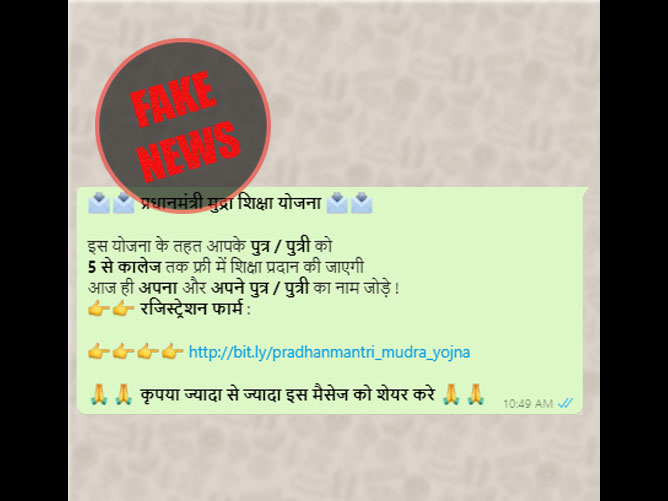 New Delhi (Team Vishvas).  A message is going viral on social media that says “📩📩 Pradhan Mantri Mudra Shiksha Yojana”. Under this scheme, your son / daughter will be provided free education from class 5 to college. .. add your son / daughter’s name …. 👉👉 Registration form: 👉👉👉👉 http://bit.ly/pradhanmantri_mudra_yojna .. 🙏🙏 Please share this message 🙏 🙏. ” Actually this post is wrong. There is no govt scheme like Prime Minister’s money education scheme. The Government started the PMMY scheme in year 2015 for the assistance of people who have started small enterprises. Under this, a small amount of loan is given to people to start their venture (business).

To start your investigation, we clicked on the link in the message. Clicking on this link opens a page with URL  http://pradhanmantri-mudra-yojna.imazesoft.com/. The page has an image of Prime Minister Modi  with the logo of the Prime Minister’s Mudra Scheme.

Beneath this logo is a form. On this first page it says: ‘Giving correct answer to the following 2 questions is necessary’. And the two questions are: ‘Q1: Are you a citizen of India?’ And ‘Q2: Have you opened the bank account under the Prime Minister’s Jandhan scheme?’. You can answer with ‘yes’ or ‘no’ .

Whether you press Yes or No, when you submit it, you are forwarded to the next page. Next they ask you about your state.

After you share this message with 10 people, you are asked to download a mobile app named True Balance. True Balance is a division of Balance Hero India Pvt Ltd. Truebalance is a mobile wallet app. We called and mailed the office of Truebalance but we did not get any response from there.

We spoke to a PMMY official and he told us that “there is no scheme like Pradhan Mantri Mudra Shiksha Yojana. PM Modi launched a scheme called Pradhan Mantri Mudra Yojana in 2015. MUDRA is a refinancing institution. PMMY was launched to help those who have started their own small enterprises. MUDRA do not lend directly to the micro entrepreneurs / individuals. Mudra loans under Pradhan Mantri Mudra Yojana (PMMY) can be availed of from nearby branch office of a bank, NBFC, MFIs etc. Borrowers can also now file online application for MUDRA loans on Mudramitra portal (www.mudramitra.in). There are no agents or middleman engaged by MUDRA for availing of Mudra Loans. The borrowers are advised to keep away from persons posing as Agents of MUDRA . PMMY’s full name is Micro Units Development Refinance Agency.”

You can have look at this website for full information on PMMY.

Conclusion: In our investigation, we found that the viral message is wrong. There is no Govt scheme by the name ‘Prime Minister’s Mudra Shiksha Yojna’. Rather, there is a scheme called Prime Minister Mudra Yojna  under which a small amount of loan is given to people to establish their own business.