The video claiming that NASA has recorded sun’s sound and sun has chanted Om is misleading. Yes, NASA admitted that Sun can be heard, it produces sound, but definitely not ‘Om’ as claimed in the viral post. 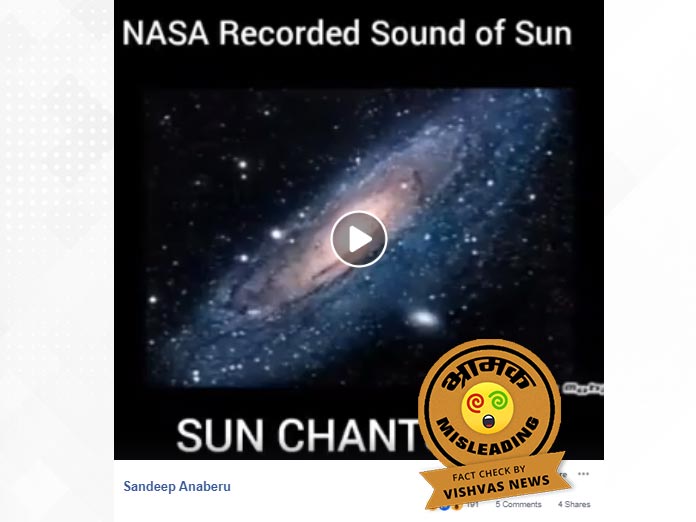 A video doing rounds on social media claims that NASA has recorded the sound of sun and the sun chants ‘OM’. In the viral video, various images have been displayed with the sound of ‘OM’ being audible. Vishvas News investigated and found that the viral post is misleading. Yes, NASA admitted that Sun can be heard, it produces sound, but definitely not ‘Om’.

Vishvas News investigated and found the original video released by NASA on the research they had conducted on Sun’s sound.

As per the official website of NASA, data from ESA (European Space Agency) and NASA’s Solar and Heliospheric Observatory (SOHO) has captured the dynamic movement of the Sun’s atmosphere for over 20 years.

Data from SOHO, sonified by the Stanford Experimental Physics Lab, captures the Sun’s natural vibrations and provides scientists with a concrete representation of its dynamic movements.

Here is the Sun sonification (raw audio) as shared by NASA:

NASA recorded the solar sounds generated from 40 days of the Solar and Heliospheric Observatory’s (SOHO) Michelson Doppler Imager (MDI) data and processed by A. Kosovichev, according to NASA’s website.

These vibrations allow scientists to study a range of complex motions inside the Sun, from solar flares to coronal mass ejections.

The sound of the sun shared by NASA does not match with the sound shared in the viral post. The Sun does not chant Om as evident in the report on NASA’s official website.

We also found a tweet on the official twitter handle of NASA shared in 2018. In the tweet, it was mentioned: “The Sun is not silent. The low, pulsing hum of our star’s heartbeat allows scientists to peer inside, revealing huge rivers of solar material flowing, along with waves, loops, and eruptions. This helps scientists study what can’t be seen.”

NASA has not made any statement with the sound of Sun similar to OM.

Vishvas News contacted NASA regarding the same and the Ames Public Inquiries department of NASA reverted by sharing the link of the report published in 2018 on the Sounds of Sun and that NASA has not recorded OM as the sun’s sound.

Conclusion: The video claiming that NASA has recorded sun’s sound and sun has chanted Om is misleading. Yes, NASA admitted that Sun can be heard, it produces sound, but definitely not ‘Om’ as claimed in the viral post.