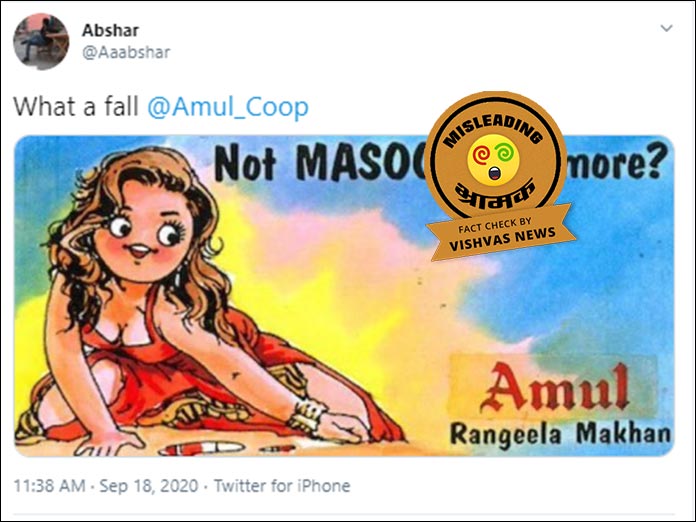 New Delhi (Vishvas News): A post going viral on Twitter shows a cartoon featuring a woman with a slogan ‘Not Masoom Anymore’.  The post is viral as recently as it has been shared and retweeted by many in the month of September 2020. When Vishvas News investigated we found that the photo is from 1995 and is going viral as recent. Amul came up with this cartoon in 1995 after the movie Rangeela got released and named the poster as Rangeela Makhan.

A tweet going viral as recent shows a cartoon featuring a woman with a slogan ‘Not Masoom Anymore’. The post is viral as recently at it has been shared and retweeted by many in the month of September 2020. The archived version of the post can be checked here.

We performed Google Reverse Image Search of the viral photo and found that the photo existed online since 1995.

We found a tweet on social media where a user claimed that the hoarding was released by Amul in 1995 when the movie Rangeela released. It has nothing to do with any recent controversy.

Vishvas News further searched and found the same image on Amul’s archived page. Here’s the screenshot of the image:

We spoke to Vishal from Amul Customer Care department regarding the viral photo. He said: “This poster was released by Amul in 1995 after the movie Rangeela got released. It is not recent.”

The post is shared on Twitter by a user named Abshar. When we scanned the profile of the user we found that the profile was created in March 2014 and the user has 9124 followers till Oct 12, 2020.