According to the Vishvas News’ investigation, the post that went viral in the name of Assam Chief Minister Dr. Himanta Biswa Sharma regarding the closure of schools is fake. 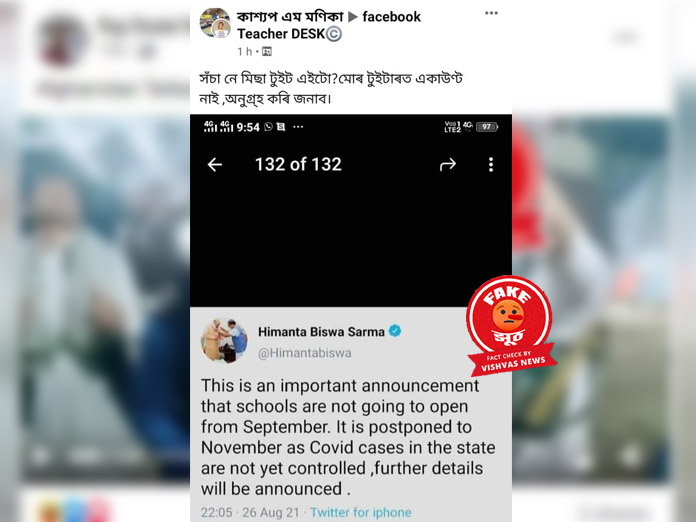 Guwahati (Vishvas News) : A screenshot of a tweet by the name of Assam Chief Minister Dr Himanta Biswa Sharma has gone viral on social media recently. According to the viral post, CM tweeted that schools in Assam will not open in September. The tweet suggests that the opening of schools in Assam has been postponed till November as the Covid situation in the state is not under control. Vishvas News found in its investigation that the viral tweet is fake. Assam chief minister’s office has clarified that this was not tweeted from the official handle of the CM. This post is fake.

Facebook user Kashyap M Manika shared a screenshot of this tweet on a Facebook group called Facebook Teacher Group. The screenshot has also been shared on various WhatsApp groups. This screenshot reads – This is an important announcement that schools are not going to open from September. It is postponed to November as Covid cases in the state are not yet controlled, further details will be announced.”

Vishvas News contacted Chief Minister’s Public Relations Cell officer in connection with the viral screenshot. He also told us that it was completely fake and that an FIR has been launched with Assam Police about this fake account.

Vishvas News found a tweet on the official account of Assam CM, clarifying that the viral tweet is fake and CM’s office has not made any such announcement.

According to https://www.timesnownews.com/education/article/assam-schools-colleges-to-reopen-from-september-first-week-details-here/80450 the schools and Colleges in Assam would reopen in September first week.

When we scanned the Facebook profile of user মণিকা এম কাশ্যপ who shared screenshots of Assam Chief Minister Dr. Himanta Biswa Sharma’s tweet on Facebook, we saw that the user was from Nagaon. We did not get much information as the user’s account is locked.

Conclusion: According to the Vishvas News’ investigation, the post that went viral in the name of Assam Chief Minister Dr. Himanta Biswa Sharma regarding the closure of schools is fake.