Fact Check: No, Gujarat police did not seize weapons from a mosque 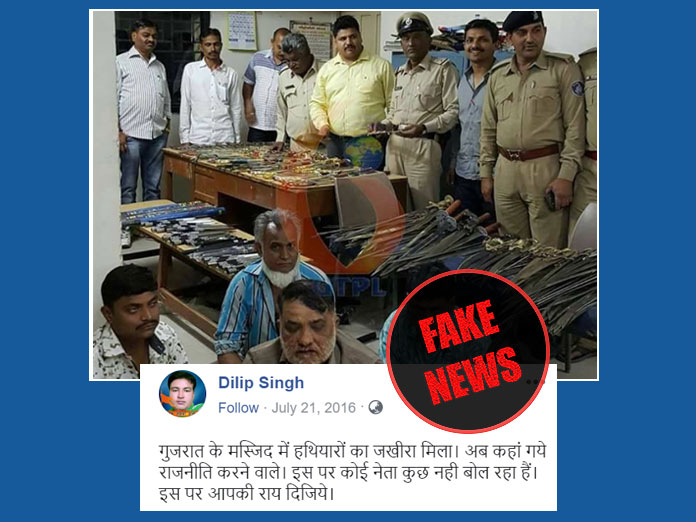 A post is getting viral on social media in which some people could be seen sitting on a floor with some weapons. It has been claimed in the viral post that the weapons have been seized from a mosque in Gujarat. Vishvas News investigated and found that the viral post is fake. The photo is actually 3 years old and the weapons were seized from a novelty store of a hotel in Rajkot, Gujarat. 257 swords and knives were also found. 5 suspects were arrested in this case. The incident happened in 2016.

The post shared by a Facebook user Dilip Singh shows some people sitting on the floor with some weapons. The caption in the post states that the weapons have been seized from a mosque in Gujarat. The photo is getting viral with a false claim.

Using Twitter Advanced Search of InVid, we searched old tweets made by the official Twitter handle of @GujaratHeadline. We found a Tweet that captioned: “#Rajkot: Stock of #lethal #weapons found from #Novelty #store; 5 persons arrested.”  The tweet was made on March 5, 2016.

We further investigated and found a report on a media website. In this website also it was mentioned that 257 weapons were seized in a Novelty store at a hotel based out of Rajkot-Ahmedabad highway. The tweet used the same pictures.

The post claiming that Gujarat police seized weapons from a mosque is fake.