Fact Check: No, NASA did not develop a machine to produce rain-generating clouds 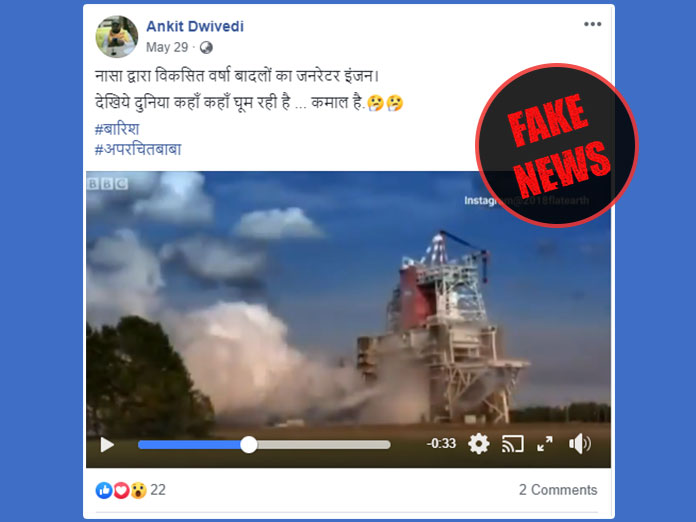 A video shared on Facebook shows a gigantic machine producing a large amount of thick white fumes. The caption in the video claims that NASA has developed a machine that produces rain-generating clouds. Vishvas News investigated and found that the viral claim is false. National Aeronautics and Space Administration (NASA) has not developed a machine that produces rain-generating clouds. The video has BBC logo on the top left corner and the video seems to be produced by the BBC.

A video shared on Facebook shows a machine that produces white fumes. The video claims that the machine produces fumes and generates rain clouds. The video has been shared by the Facebook user Ankit Dwivedi. The video has a BBC logo on the top left corner.

Vishvas News started the investigation by putting the keywords “NASA Rain-Cloud Machine” on Google Search. We found an article titled ‘There Is No NASA Cloud Machine – Here’s The Real Explanation Of That Viral Video’ on Forbes dated April 9, 2018.

We searched the profile of the author who is the contributor of the article. We found that the author had worked as the Research Meteorologist at NASA-Goddard Space Flight Center.

In the article, it was explained how testing the rocket, R-25 in this case, produces water vapour.

The article reads: The exhaust from the RS-25 is primarily water vapor because the engine burns liquid hydrogen and liquid oxygen. Oh…..guess what happens when they combine: You get H2O (also known as water). Therefore, the “clouds” that you see in the pictures or videos are a by-product of a very simple scientific process (see below). If the water vapor condenses, it actually may form drops large enough to fall as liquid or what appears as “rain.”

We could see the logo of the BBC in the video. We performed Google search using the keywords “BBC video on R-25 rocket test.”

Vishvas News found a 2.52-minute long video on Youtube’s channel ‘Top Gear’. This version of the BBC video on R-25 rocket testing was uploaded on October 29, 2010.

The viral video shared on social media is the trimmed version of this video and is shared with a false claim.

Vishvas News contacted BBC and showed them the viral video. As per BBC, the viral video is the trimmed version of the original video and is shared with the false claim.

Vishvas News investigated and found that the viral post claiming that NASA developed a machine to produce rain-generating clouds is fake.