Fact Check: No, Sending SMS To This Number Won’t Enable Bangalore Police To Track Your Location; Viral Post Is Fake

Sending SMS to the viral number will not enable Bangalore police to track the location. The viral post is fake. 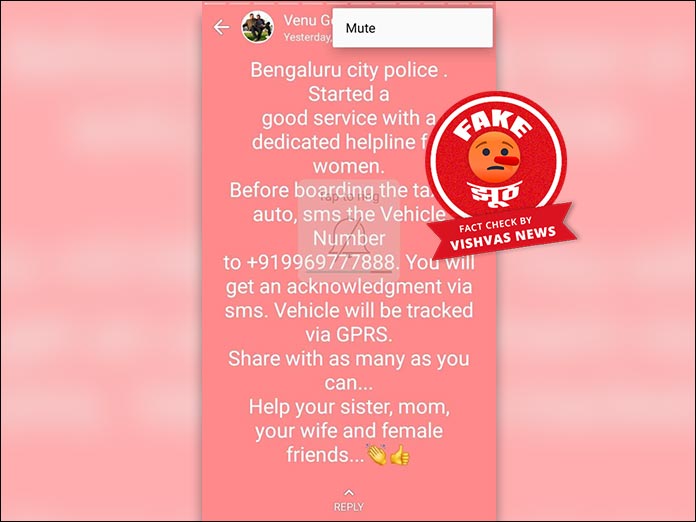 Vishvas News investigated and found the viral message to be fake. The Bangalore City Police has not publicized any such number.

A post shared on Facebook by a user named Sunitha Sunitha reads: “Bengaluru city police . Started a good service with a dedicated helpline for women. Before boarding the taxi or auto, sms the Vehicle Number to +919969777888. You will get an acknowledgment via sms. Vehicle will be tracked via GPRS. Share with as many as you can… Help your sister, mom, your wife and female friends…” The archived version of the post can be checked here.

A similar claim associated with the same number went viral in June 2019 that Vishvas News debunked. The viral number was launched in March 2014 only for Mumbai Women and was shut down in March 2017 because of poor response.

We further investigated and found that the Twitter account of Bengaluru city police clarified that the viral text messages about 9969777888 are false.

The tweet reads: #Fake message is floating on Whatsapp regarding this number as BCP’s Women Helpline. The number does not belong to BCP People are requested not to believe or share this fake message. Stringent action will be taken against those who create and spread fake messages on social media.

We tried to contact the number 9969777888 but didn’t get any response.
Vishvas News contacted Sudeep Singh, Police Inspector Traffic, Shivajinagar Traffic Police Station, Bengaluru. He also said that the viral post is fake.

The post is shared on Facebook by a user named Sunitha Sunitha. When we scanned the profile of the user we found that the user is based out of Bangalore.

Conclusion: Sending SMS to the viral number will not enable Bangalore police to track the location. The viral post is fake.