Fact Check: No, Shahrukh Khan didn’t make any such appeal for his upcoming movie “Pathan”

Shahrukh Khan has not made any emotional appeal for the success of his upcoming film Pathan. The viral post claiming so is fake. 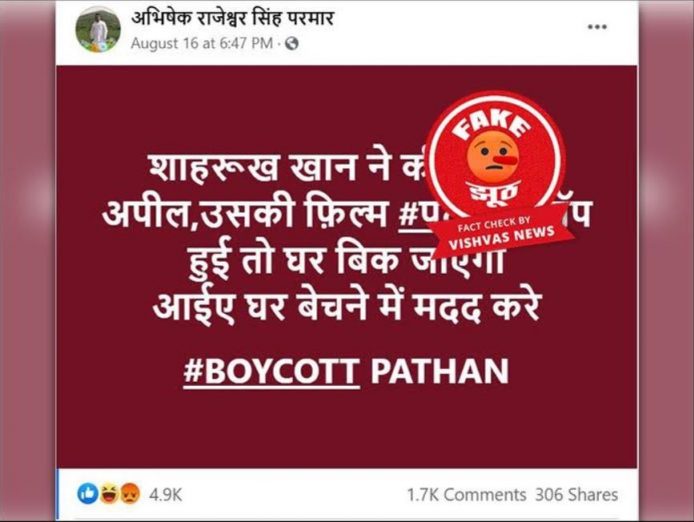 New Delhi (Vishvas News): A viral post on social media claims that Bollywood actor Shahrukh Khan has made an emotional appeal to his fans that if his movie “Pathan” will flop then he will have to sell his house. Netizens are expressing their anger in the comment box of the post by saying Boycott Shahrukh Khan and Bollywood.

A post shared in Hindi on the Facebook page “Justice for Sushant Singh Rajput #JFSSR” roughly translates to: “An emotional appeal by Shahrukh Khan, if his film Pathan fails to perform on box office, he will have to sell his house. Let us help him selling his house #BOYCOTT PATHAN”. The archived version of the post can be checked here.

To confirm the viral claim we ran a search on Google using appropriate keywords, but couldn’t found any media report supporting the claim. Shahrukh Khan is a big name in Bollywood, if he had made any such appeal, it would have made headlines.

We also visited Shahrukh’s Twitter , Facebook, and Instagram accounts, but there is no such update available. Shahrukh is very active on social media, he last posted on Independence Day i.e. August 15.

Vishvas News got in touch with the spokesperson of Shahrukh Khan’s production house Red Chillies Entertainment who confirmed that Shahrukh has not made any such appeal till the date.

Media reports speculate Shahrukh Khan may start the shooting of Yash Raj Films’ “Pathan” under the direction of Siddharth Anand from November this year.

The post is shared on Facebook Page “Justice for Sushant Singh Rajput #JFSSR” by a user named Abhishek Rajeshwar Singh Parmar. When we scanned the Facebook page and found that the page has been created on June 22 only and has more than 342.9K members.

Conclusion: Shahrukh Khan has not made any emotional appeal for the success of his upcoming film Pathan. The viral post claiming so is fake.