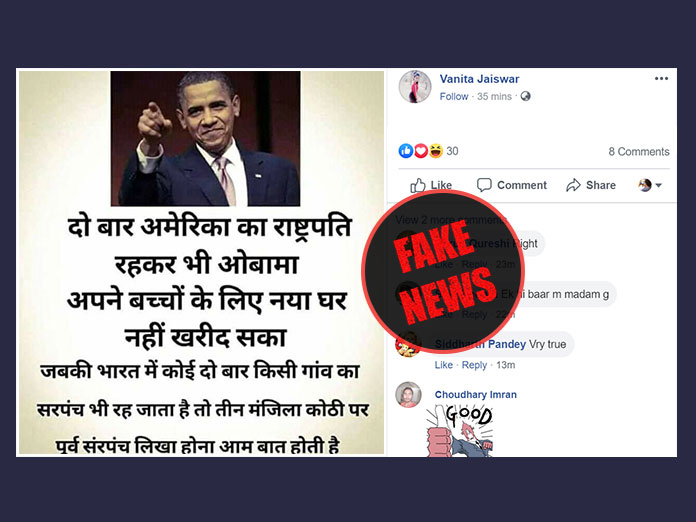 A post related to Barack Obama was shared on the Facebook page Wisdom on June 26. The post claimed that despite being the President of America twice, Barack Obama could not buy a new home for his children. The post further claimed that if in India someone gets to become the village sarpanch twice, it is common that he buys a three-storeyed villa with his designation written on his home.

The post has been shared by more than 400 users so far. The post has approximately 2000 likes and around 90 comments.

We started our investigation by searching whether it is a fact that Barack Obama doesn’t own a house. We searched the keywords “Obama Property” on Google. We found a report on CNBC dated June 2, 2017. The report stated that Barack Obama has purchased a house worth $81 Lakh in Washington D.C. The house is around 8200-square-feet.

A post related to his house is also published on Washington Post. This report was published on May 31, 2017. In the report, it has also been stated that Obama’s home that was built in 1921 was renovated in 2011.

We found another report on BBC. In the report, it was stated that “Former President of America, Barack Obama has purchased a house in Washington D.C. where he used to live on rent. He has purchased that home in $81 Lakh.

We also found a video on the website of USA Today. In this video as well, the details about Obama’s house were mentioned. This video was uploaded in June 2017.

Vishvas News further searched and found a report on the website of gobankingrates.com that stated that Barack Obama’s Net Worth is $40 Million.

We then scanned the social profile of the Facebook page Wisdom which shared the post. The page has approx. 46 Lakh followers and the page was created on September 7, 2016.

Vishvas News investigated and found that Barak Obama has a mansion which he purchased in 2017 for $81 Lakh. The viral post is fake.