Fact Check: Old image from Bangladesh viral in the name of India

This claim turned out to be false in the investigation of Vishvas News. Actually, this picture is from Bangladesh. This picture has nothing to do with India. 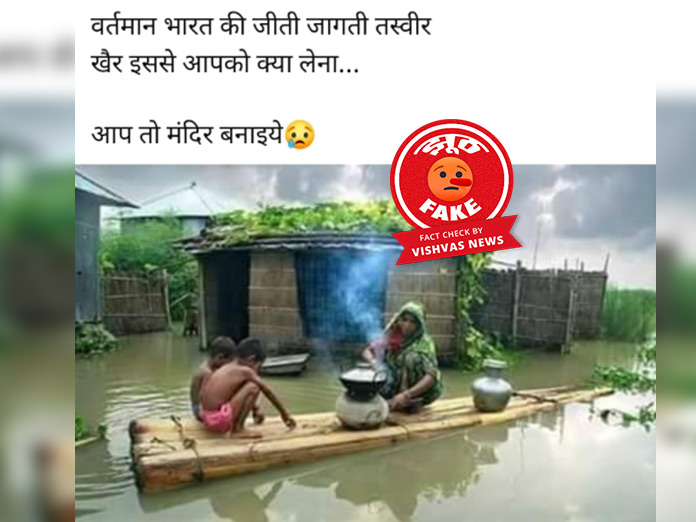 New Delhi, Vishvas News. Vishvas News received a claim on its tipline chatbot number +91 95992 99372, where our user asked us to check an image in which a woman can be seen cooking food for two children sitting on top of a wooden plank floating in the water at a flooded site. The post claims that this image is from India. Vishvas News investigated and found that this claim is false. Actually, this picture is from Bangladesh.

Vishvas News received this picture on its tipline chatbot number on +91 95992 99372. The text written on the photo read “Translated: Living picture of present India”. Well what do you have to do with this… you build a temple.”

Vishvas News searched this image using Google reverse image. We found this picture in a 2017 news story on daily-sun.com. According to the news, the picture was of the floods in Bangladesh.

For confirmation, we got in touch with Shamsul Haque Suja, the photographer who took this picture. He told us “I took this picture on 19/7/2016 at Begumganj in Kurigram district of Bangladesh. At that time I was on an assignment to cover the story about the floods in the North West region of Bangladesh. I found a family who was cooking something on a wooden plank and when I went to talk to them I saw that the mother was trying to convince her children that something was being cooked when in reality the handi had boiling water in it. Truly a pitiful sight for all of us. After taking this picture, my team helped the family with food and shelter.”

Many people are sharing this picture on social media with the wrong claim. One of them is a Facebook user named ‘Mumtaz Beagum Mumtaz’. According to the profile, the user hails from Bihar.

Conclusion: This claim turned out to be false in the investigation of Vishvas News. Actually, this picture is from Bangladesh. This picture has nothing to do with India.