The image being shared with the claim of increasing number of Muslim population in Nainital in 2022 is of Bangladesh’s Ijtima in 2018, which is being viral with false and communal claim as Nainital. 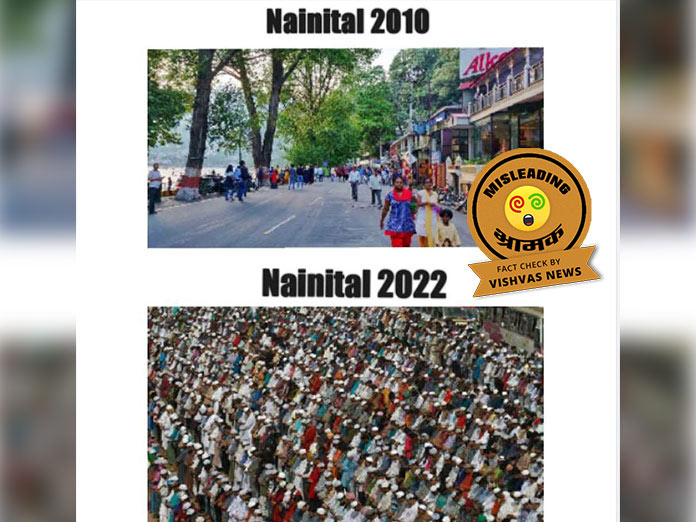 New Delhi (Vishvas News): A collage of two pictures is going viral on social media, with the claim that the first picture seen in it is from Nainital in 2010, while the second picture is from 2022, which shows the growing Muslim population in the city.

Vishvas News investigated and found the claim to be misleading and communal. The picture going viral with the claim of increasing Muslim population in Nainital is not of India, but of Bangladesh, which is being shared with the false claim.

While sharing the viral collage (archive link), Facebook user ‘Rahul Tiwari’ has described both the pictures included in it as from Nainital. Several other users have shared this picture with similar claims.

Two pictures have been used in the viral collage, out of which the second picture is said to be of Nainital of 2022. In this picture, Islamic gathering can be seen at one place where people can be seen offering Namaz. We performed Google reverse image search and found this image in an Al Jazeera report published on June 24, 2018. According to the information given in the report, this picture is from Bangladesh.

As per the report written with Ghazipur, Bangladesh dateline, this picture is from the annual Bishwa Ijtema, when a large number of Muslims offered prayers in the city on the banks of the Turag river, about 35 km from Dhaka.

Other photographs related to the event have also been shared in the report, all of which are from Bangladesh. It is clear that this picture is in the report published in 2018, while in the viral collage it has been described as 2022.

Also, this picture is of Bangladesh and not of Nainital.

The first picture of the collage is said to be of Nainital, which is correct. Through Google reverse image search of this picture, we found many reports in which it has been described as Upper Mall Road of Nainital. This picture is also present on wikimedia.org in the name of Nainital.

Vishvas News spoke to Kishor Joshi, Correspondent from Dainik Jagran Nainital who confirmed that “The first picture of the viral collage is from Mall Road in Nainital.”

Conclusion: The image being shared with the claim of increasing number of Muslim population in Nainital in 2022 is of Bangladesh’s Ijtima in 2018, which is being viral with false and communal claim as Nainital.