Fact Check: Old Picture From Nepal Passed off as Earthquake in Assam 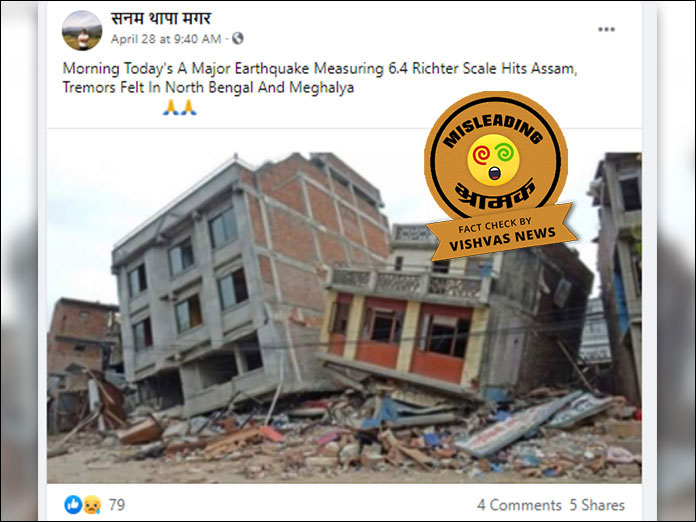 New Delhi (Vishvas News): A picture is going viral on social media, in which two broken buildings can be seen. It is being claimed with the post that this picture is of the recent earthquake in Assam. Vishvas News investigated and found the viral post to be misleading.

The picture is not from Assam, but from an earthquake in Kathmandu, Nepal that happened on April 25, 2015.

Vishvas News performed Google Reverse Image Search of the viral photo. We found this picture in a report dated August 23, 2016, published in phys.org. According to the report, this picture is of the 2015 earthquake in Kathmandu.

We found another report dated April 30, 2015, where a similar picture was taken from a different angle. This report was published by theguardian.com. It mentioned the earthquake in Nepal on April 25, 2015. According to the caption of the photo used in the report, this photo is from Kathmandu.

We contacted Arpan Shrestha, the National Reporter of the Nepal newspaper Kathmandu Post. He said, “This picture is from Kathmandu. It was clicked after the 2015 earthquake. At that time I was a freelancer in Kathmandu itself.. “

According to Dainik Jagran’s news report dated April 28, “Tremors were felt in Assam this morning. The magnitude of the earthquake on the Richter scale was measured at 6.4″. Read the complete report here.

Several buildings were damaged in the earthquake that struck Assam on April 28. More information on this can be found in a report by India Today here.

We scanned the profile of the Facebook user ‘Sanam Thapa Magar’ who shared this post. We found that the user is based out of Darjeeling. The user has 4,954 friends on Facebook.

Conclusion: Vishvas News investigated and found the viral post to be misleading. The picture is not from Assam, but from an earthquake in Kathmandu, Nepal that happened on April 25, 2015.