Fact Check: Old picture of Bangladesh floods viral in the name of India

Vishvas News in its investigation found that this claim is false. Actually this picture is from Bangladesh. This picture has nothing to do with India. 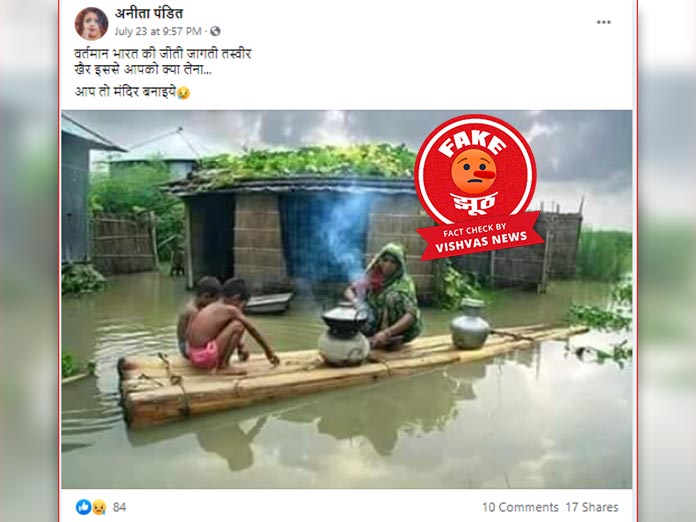 New Delhi, Vishvas News. Amid floods in many places in India, a picture is going viral on social media, in which a woman can be seen cooking food for her two children on top of a wooden plank floating in the water at a flooded site. People are posting this picture on social media with the claim that this photo is from India. Vishvas News, in its investigation, found that this claim is false. Actually, this picture is from Bangladesh. This picture has nothing to do with India.

The caption accompanying the viral picture on social media reads, “Translated:  Living picture of present-day India. Well what should you take from this…you should build a temple.”

We searched this image using Google reverse image. We found this image in a report published in 2017 at daily-sun.com. This news was about the floods in Bangladesh.

We also found this image in a news report published in 2017 on another Bangladeshi news website thefinancialexpress.com.bd.

We reached out to The Daily Sun’s Dhaka-based digital reporter, Mohd Mankool Rahman, regarding this. He told us that this picture is of the 2016 floods in Kurigram district of Bangladesh.

We also reached out to Shamsul Haque Suja, the photographer who took the picture. He said “This picture was clicked by me on 19/7/2016 at Begumganj Union, Ulipur Upazila, Kurigram District in Bangladesh. The year was 2016 and I got an assignment from my office to cover the story regarding floods in Bangladesh especially the northwest area. I found a family who was cooking something on a raft and when I went to talk to them, I saw the mother was trying to convince her children with boiling water that something is being cooked. It was really pathetic scenery for all of us. We helped them with food and also gave them shelter. During that meeting, I clicked this picture.”

Many people are sharing this picture on social media with false claims. One of these is a Facebook user named ‘Anita Pandit’. As per the profile, the user is a resident of Kanpur and has 3,734 followers on Facebook.

Disclaimer: The quote of photographer Shamsul Haque Suja, who took the viral picture, has been added to the fact check on 04-08-2021 after his reply.

Conclusion: Vishvas News in its investigation found that this claim is false. Actually this picture is from Bangladesh. This picture has nothing to do with India.