An aerial view of floods in China from 2020 goes viral claiming to be recent. 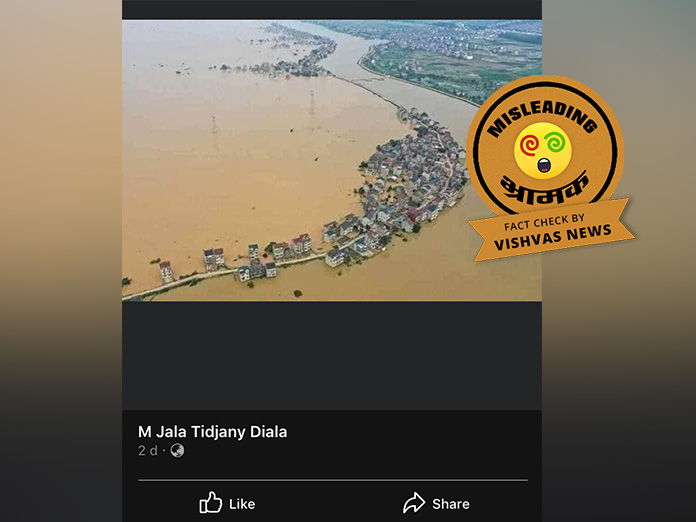 Vishvas News (New Delhi): The toll in central China floods have reached 56 and the losses have already mounted to over $10 billion. Amidst this, an old image of China floods is being circulated over various social media platforms. The image is an aerial view of the effect of floods. Vishvas News in its investigation found out that the image is old.

Claim:
Facebook user M Jala Tidjany Diala posted the viral picture on profile among other pictures of China floods and wrote:
China: Floods, several deaths
Deaths in Zhengzhou metro, nearly 200,000 evacuated
The flooding in central China’s Henan Province has been called “extremely serious” by Chinese President Xi Jinping.
With scenes of chaos Tuesday, July 20 in the city of Zhengzhou, which saw the equivalent of a year of rain fall in three days. A provincial capital where the army was called in to reinforce it.

We found the viral image in an article on jagran.com
The article was published on the website on 14 July, 2020.

We also found the picture on the AlJazeera website. The article uploaded on 14 July 2020 had various pictures from the 2020 floods. The viral picture too was there.
The caption of the picture said: Submerged streets and inundated buildings after a dam was breached due to flooding in Jiujiang in China’s central Jiangxi province. [AFP]

This calrified that the picture was from 2020 and belonged to AFP.

We found the image on gettyimages too. The caption said: TOPSHOT – This aerial view shows submerged streets and inundated buildings after a dam was breached due to flooding in Jiujiang in China’s central Jiangxi province on July 13, 2020. – Floods across central and eastern China have left more than 140 people dead or missing and are swelling major rivers and lakes to record-high levels, with authorities warning that the worst was yet to come. (Photo by STR / AFP) / China OUT (Photo by STR/AFP via Getty Images)

In the last step of investigation, Vishvas News sent an e-mail to AFP to confirm the image. They too clarified that the image was from AFP archive.

Vishvas News then did a social background check on the profile of the user who shared the picture. We found out that the user lives in Banjul, Gambia.

Conclusion: An aerial view of floods in China from 2020 goes viral claiming to be recent.