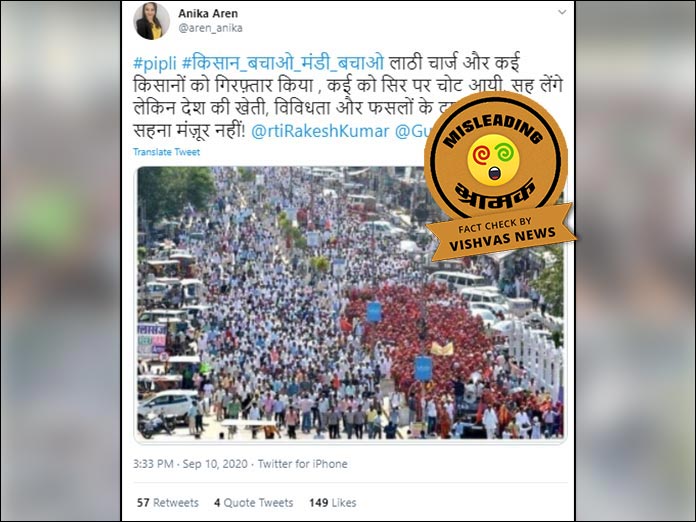 New Delhi (Vishwas Team): A picture is doing rounds on social media in which a huge gathering can be seen on the street. The caption with the photo claims that the photo is of farmers gathering in Pipli, Haryana where they were lathi-charged.

Vishvas News investigated and found the post to be misleading. The picture is of farmers gathering in Sikar, Rajasthan. It is a 3-year-old picture captured in 2017.

(English: Farmers were beaten with lathis and were arrested, many suffered head injuries, will bear it but will now allow to bear the brunt at the cost of farming, diversity and crops of the country).

The archived link to the post can be checked here.

Vishvas News started its investigation by searching the picture using Google reverse image search tool. We found the same picture in news report published in Rajasthan Patrika. This news was published on September 4, 2017 and carried the headline translated in English: “For the first time people saw such a huge ‘funeral’, hundreds of women attended, roads jammed for 4 hours.”

According to this news report, this incident is from Sikar in Rajasthan, wherein 2017, farmers demonstrated the debt waiver and low prices of crops. Thousands of people participated in this demonstration, due to which there was a long jam on the streets.

Some glimpses of this performance can be seen in the video uploaded on the YouTube channel. This video was uploaded on September 4, 2017, and carried the headline: ‘Kisan rally in Sikar’.

Vishvas News spoke to Dainik Jagran’s Jaipur in-charge Narendra Sharma. While talking with us, Narendra confirmed that this picture is of Sikar, Rajasthan in 2017 where farmers gathered in large numbers. It has nothing to do with Punjab and Haryana. ”

This picture has been shared by many people on social media and one of them is a Twitter user named Anika Aren. She is a TV news anchor by profession and is followed by 1,223 people on Twitter.

Conclusion: The viral post was found to be misleading in Vishvas News investigation. It shows the farmers’ demonstration in Sikar, Rajasthan in 2017, which is being viral by stating the latest.