Fact Check: Old picture of the fire at Rohingya refugee camp being shared with the false claim

In the investigation of Vishvas team, the claim made in the name of Rohingya refugee turned out to be fake. 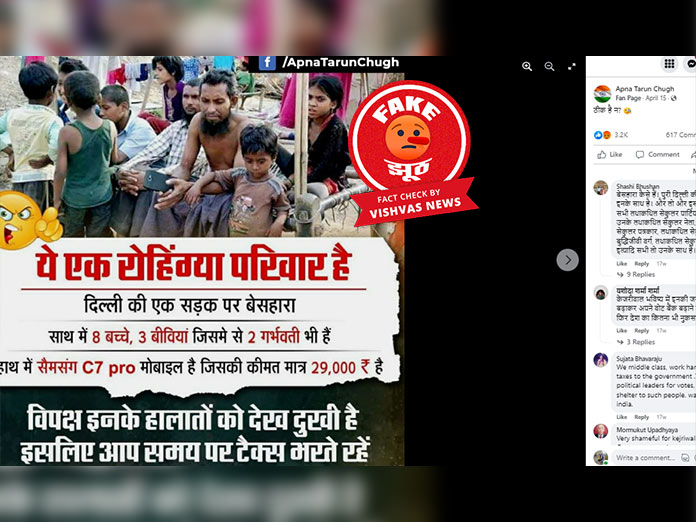 New Delhi (Vishvas News). A picture is going viral on social media, in which a man can be seen sitting on a broken cot. There are kids around this person in the viral picture. There is also a smartphone in this person’s hand. The post is claiming that this man is a Rohingya refugee and has no clothes or anything to eat, but he has three wives, 8 children, and a smartphone. This post turned out to be fake in the investigation of the Vishvas team. The photojournalist who took the picture told us that the viral claim is false and that the children in the picture did not belong to this person and neither did the mobile phone in his hand.

Facebook user Apna Tarun Chugh uploaded a picture with the caption “This is a Rohingya family. Destitute on a road in Delhi. Together with 8 children, 3 wives, out of which 2 are also pregnant. In hand is Samsung C7 pro mobile which costs only Rs 29,000. The opposition is sad to see their condition, so keep paying taxes on time.”

The archive link of the viral post can be seen here.

To start our investigation, we first did a Google reverse image search on the viral image. We found this image first uploaded in a news18.com report, which was filed on 15th April 2018. According to the information given with the picture, this photo was clicked by Debayan Roy. The news was about a fire in a slum in Delhi. According to the news, on April 15, 2018, many people were scorched due to a sudden fire in the Rohingya refugee camp in Madanpur Khadar, Delhi. Nothing related to the claim of the viral post was found anywhere in the news.

We then got in touch with Debayan Roy, the photographer who took the picture, on Twitter. In response, Debayan Roy called this post fake. He said that this information is completely wrong. He said that the picture was taken by him when he had gone to cover the fire in the slum settlement in Madanpur Khadar in Delhi in 2018. He told that the person seen in the picture was a Rohingya. The claim that he has 3 wives and 8 children is false. Even the phone in his hand was not his, but of a volunteer’s who came to his aid.

We also found an old tweet by Debayan Roy on this, in which he had called this claim fake.

Searching with keywords, we came to know that more than 200 shanties were gutted due to a sudden fire at a Rohingya camp in April 2018. At that time many media outlets covered it.

Vishvas News had fact-checked the claim related to the same picture once before. It can be read here.

Finally, we did a social scanning of the profile of Facebook user Apna Tarun Chugh, who made the fake post viral. This page has 1.1 million followers.

Conclusion: In the investigation of Vishvas team, the claim made in the name of Rohingya refugee turned out to be fake.