Fact Check: Old Video of Fire in Mobile Tower Viral in the Name of Gujarat 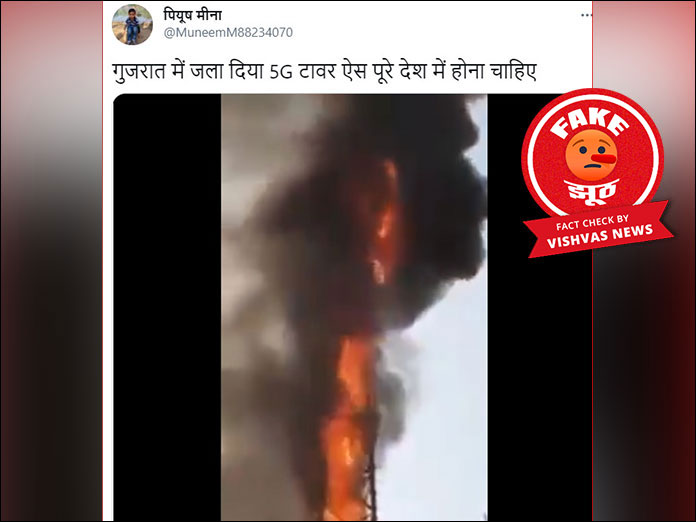 Vishvas News (New Delhi): A video going viral on social media shows a mobile tower that caught fire. As per the claim, the 5G tower in Gujarat was set on fire. Vishvas News investigated and found the viral post to be fake. The video exists on the Internet with old dates in the names of different cities. This video went viral earlier as well with a different claim, it can be checked here.

Twitter user Piyush Meena posted a video on May 13 claiming that a “5G tower was burnt in Gujarat. This should be done all over the country.”

Vishvas News used the InVid tool to extract the screengrabs of the video. We then performed Google Reverse Image Search of the screengrabs. We found the video on a YouTube channel named Garvit Sihag. It was uploaded on February 8, 2018. No specific information regarding the video was given here. Watch the full video here.

We also found the viral video on a YouTube channel named HindExpress TV. Uploading it on January 27, 2018, the channel described it that the fire broke out in the mobile tower at Barara sub-division of Ambala. Watch the full video here.

It was proved that the video that is going viral in the name of Gujarat is available on YouTube since 2018.

Vishvas News contacted Prashant Nema, a senior journalist from Gujarat. He said: “No such incident happened in Gujarat. The viral video is very old. It has nothing to do with Gujarat.”

Conclusion: Vishvas News investigated and found the viral post to be fake. The video exists on the Internet with old dates in the names of different cities. This video went video earlier as well with a different claim.