Fact Check: Photo of Incident in Bangalore Shared With A Fake Claim

The photo of the incident in Bangalore is shared with a fake claim. 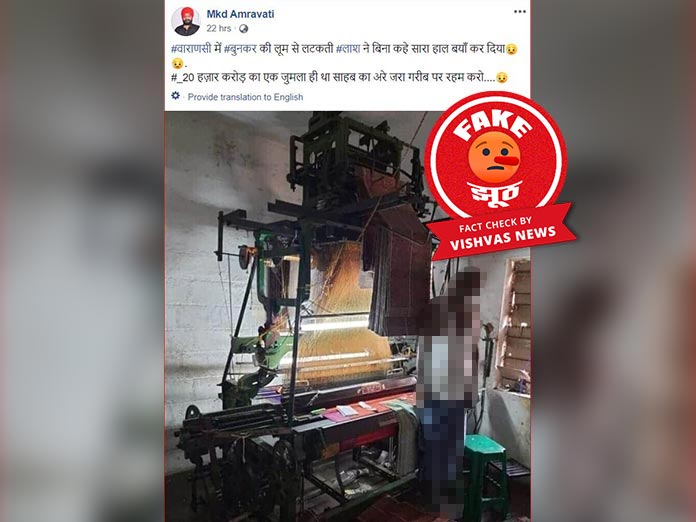 New Delhi (Vishvas News): A viral photo on social media shows a picture of a weaver who committed suicide in PM Modi’s parliamentary constituency Varanasi. Vishwas News investigated and found that the picture is of Bangalore, Karnataka and has nothing to do with Varanasi. The District Magistrate of Varanasi has also denied the viral post.

Facebook user Mkd Amravati, uploaded a post on June 25, claiming: “In Varanasi, a dead body hanging from # weaver’s loom. The death of the weaver says it all. 20000 crores was a scam, sir, please have mercy on the poor….’

Vishvas News searched the viral photo using Google reverse image tool. We found the original picture on a website called Just Kannada. According to the report dated July 24, 2020, the incident happened in Bengaluru.

The report was in Kannada language, we translated it in English using Google Translate. The report stated that a weaver in Bengaluru committed suicide because of the financial crisis. The name of the 55-year-old deceased was Lakshmipati. The incident is from the Sampjehihalli police station area of ​​Bengaluru. The report can be read here. Vishvas News does not independently confirm this news.

Varanasi’s DM Kaushal Sharma denied the viral post. According to him, no such incident has taken place in Benares district.

Varanasi’s DM had also tweeted about this matter. In the tweet posted on July 25, the DM said that the picture going viral on social media is not related to Varanasi. I request everyone to highlight this on Twitter.

We scanned the social profile of the user who posted the fake news. We found that Facebook user Mkd Amravati hails from Amravati, Maharashtra. His account is followed by more than 21000 people.

Conclusion: The photo of the incident in Bangalore is shared with a fake claim.