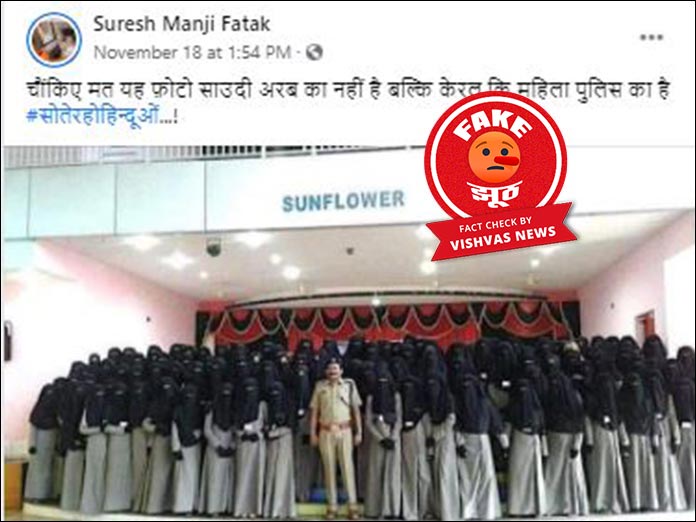 New Delhi (Vishvas News): A picture going viral on social media shows some women standing wearing burqa and surrounding a police officer. The claimed with the photo states that the women are the police from Kerala. Vishvas News investigated and found the claim to be false. The women seen in the picture going viral are female students. The picture was taken in 2017 at an Arabic college in Kasaragod district in Kerala.

Social media user ‘Suresh Manji Fatak’ wrote, with the viral picture, “Don’t be shocked, this photo is not of Saudi Arabia but of the Kerala Police women.” Vishvas News also got this claim for fact checking on its Fact Checking WhatsApp chatbot (+919599299372).

The archived link of this post can be checked here.

Vishvas News searched the image using Google reverse image tool. We found the same picture in a news report from The New Indian Express published on October 24, 2017. According to the news report, in the picture, the then police chief of Kasargod district, KG Simon, was photographed with the female students. Reportedly, the women seen in the photograph were students of an Arabic college in the Kasargod district of Kerala.

We contacted the police officer KG Simon for further confirmation in this matter. He confirmed that the picture was from 2017, when he visited as a guest at an event organized at an education institute in Kasaragod and was photographed. He added, “The women seen in the picture were female students, not policemen.” The students were participating in a self-defense workshop called ‘Nirbhaya’ organized by the local police. “

Many people are sharing this post on social media. One of them is a Facebook user named Suresh Manji Fatak. This user has 1,355 followers on Facebook. The user is from Mumbai.

Conclusion: The women seen in the picture are female students, not policemen. The picture was taken in 2017 at an Arabic college in Kasaragod district in Kerala.