Fact Check: Playing excessive games on mobile phone does not cause a parasite in the eyes

A post claiming that excessive playing of games on mobile phone causes a parasite is fake. 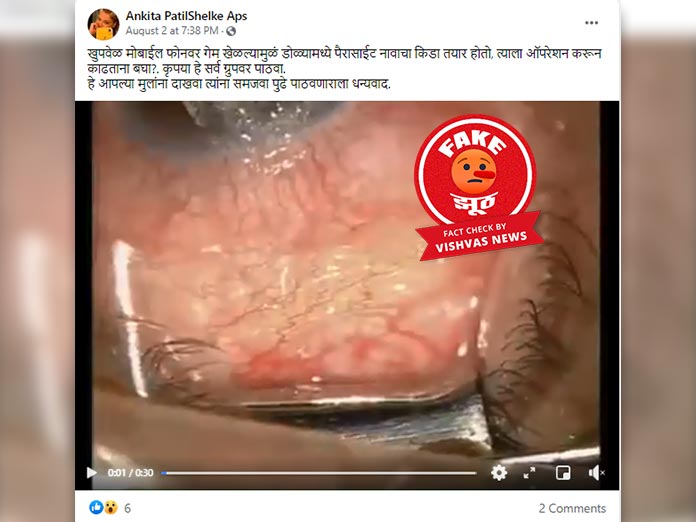 Vishvas News (New Delhi): Vishvas News came across a viral post in Marathi. The viral post claimed that playing excessive games over mobile phones can cause a parasite in the eyes, which can be removed by operating. The post also consists of a 30 second long video.
Vishvas News in its investigation found the post to be fake.

Translation: Excessive playing on the mobile phones can cause a parasite in the eye. You can watch this being removed through an operation. Share it with other groups and show it to your children. Share the message.

Investigation:
Vishvas News started the investigation with InVid tool. We uploaded the video and got some keyframes from the video.
Vishvas News uploaded these frames and ran a Google Reverse Image Search on those.
We found various videos of the same whose duration was longer than that of the video shared.

However, this video was a part of an 11:02 long video shared on the indiavideodotorg channel. The video was posted on April 20, 2013.

The description said: 20 cm Long Worm In The Human Eye, First Ever Recorded On Video
This is the surgical removal of the longest Loa Loa worm (20 cm long) from eye ball ever.

We then searched the internet for ‘Loa Loa’ worm and came across the CDC website. The website said: Loiasis, called African eye worm by most people, is caused by the parasitic worm Loa loa. It is passed on to humans through the repeated bites of deerflies (also known as mango flies or mangrove flies) of the genus Chrysops. The flies that pass on the parasite breed in certain rain forests of West and Central Africa.

Nowhere in the article it was written that the worm is caused due to excessive usage of mobile phone or playing extensively on mobile phones.

In the last stage of investigation Vishvas News contacted, Dr Poonam Harkut (MBBS, CPS, FCPS, MS Ophthalmology), Nagpur. She informed that the viral claim is fake and that excessive use of mobile phones or playing on the mobile phones does not cause a parasite or a worm in the eyes.

In the end we did a social background check of the profile that shared the post. The profile Ankita PatilShelke Aps is a resident of Auckland, New Zealand and hails from Kolhapur. She has over 10,335 followers.

Conclusion: A post claiming that excessive playing of games on mobile phone causes a parasite is fake.