Fact Check: PM Modi’s viral ‘lootera’ video is from 2021 and used out of context

The viral video on Facebook is taken out of context from Narendra Modi’s Siliguri rally held in West Bengal in 2021. The PM was narrating the story of a dacoit; the viral video has missing context and is misleading! 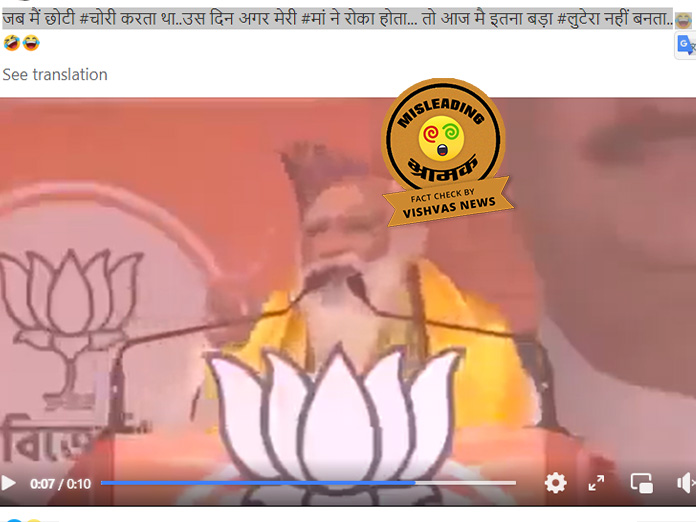 New Delhi (Vishvas News): A viral video of Prime Minister Narendra Modi with the claim calling himself ‘lootera’ (dacoit) during a rally in Siliguri, West Bengal, was making rounds on social media in the first week of September 2022.

Vishvas News, in its investigation, found the video from the PM’s April 2021 rally where Narendra Modi was narrating the story of a dacoit and not talking about himself. Hence, the circulated video proves to be taken out of context, altered and misleading.

Facebook user Iyc Jabalpur posted a video of PM Narendra Modi calling himself ‘lootera’ (dacoit). The post read: “If my mother had stopped me when I used to steal little things, I wouldn’t have become a dacoit.”

Vishvas News first analysed the 10-second video through keyframes on the INVID tool. We found many similar posts like this, this and this circulating on Facebook. We also found identical videos shared in September 2021. The claim was also seen viral on Twitter.

Next, we used a keyword search on Google to see the original video and found similar videos of the Prime Minister shared by other news organisations on YouTube. In the videos, one can see that the backdrop and PM’s attire are identical to the viral post.

Later, we also explored Narendra Modi’s official and verified Youtube account (12.5 million subscribers) and found this video. At 39 minutes and 40-second timeframe, we can hear the Prime Minister narrating the tale of a dacoit and find the exact reference of the above viral video at 40 minutes 38 seconds. He is not talking about himself but drawing lessons from the story of a dacoit and his mother for the people of West Bengal.

To confirm further, we spoke to a veteran journalist and Editor of News Sense in Kolkata, Joydeep Das Gupta, who said, “It clearly shows the video that has been made viral is taken out of context.”

We also contacted Bizay Sonkar Shastri, an Indian politician from the Bharatiya Janata Party and a Member of the Lok Sabha from 1998 to 1999, who verified the claim by saying, “99 per cent of news on social media is fake, including this one.”

Notably, the Facebook user is from Jabalpur and has 1.7k friends on Facebook. His bio shows he works with the Indian National Congress, and his intro reads – Official Facebook Account of the Indian Youth Congress-Jabalpur (Rural).

A similar video went viral in 2021 after PM Modi’s Siliguri rally in West Bengal; you can read the earlier fact-check report here:

Conclusion: The viral video on Facebook is taken out of context from Narendra Modi’s Siliguri rally held in West Bengal in 2021. The PM was narrating the story of a dacoit; the viral video has missing context and is misleading!