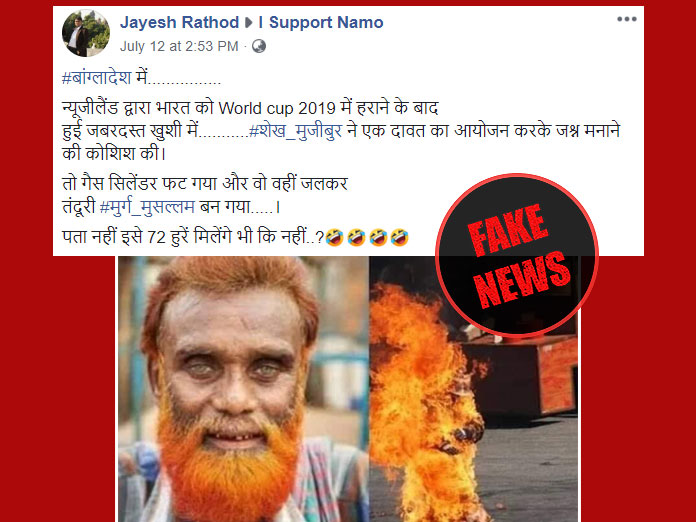 New Delhi (Vishvas Team). A post is going viral on social media where it is being claimed that a Bangladesh citizen, named Sheikh Mujibur, died in a gas cylinder blast while celebrating India’s loss in Cricket World Cup 2019 against New Zealand. In our investigation, we found that this post is fake.

Facebook user Jayesh Rathod posted a collage of two photographs in a Facebook Group name “I Support Namo.” In the post description, he wrote: ”#In Bangladesh…………….After New Zealand defeated India, Bangladeshi citizen tried to celebrate by organizing a feast. The gas cylinder bursted and he died……”

Vishvas team first started searching related news by uploading several keywords like “Sheikh Mujibur+gas cylinder” in Google search. We had to know whether any such event has happened in Bangladesh or not? After a lot of search, we did not get any link, in which any news mentioned that person named Sheikh Mujibur died with a cylinder blast while celebrating.

After that, we took the help of Google Reverse Image tool. For this, we searched the Google Reverse image by cropping the first picture used in the viral post. After all, this picture was found in Google itself.

In this Google search, we found this photo at chantalehrhardt.com. Many photographs were written that when the photographer went to Bangladesh in March/April 2017, she found orange bearded mens on the streets. After this, photographer clicked the photos of such mens having Orange Beard.

In our investigation, we found that this photographer named Chantal Aimme Ehrhardt lives in the Netherlands. She clicked the pictures of Orange bearded man.

After finding out the truth of first picture, now we had to know that where is second picture from? In the second picture, a man is surrounded by fire flames.

We found this picture on the Flicker account of photographer named Bill Townsend. This photo was uploaded on Flicker on 17 January 2007. In photo caption, he wrote: Stunt Man Performance. Which means that this photograph is not of 2019. The Person in the photograph was doing the stunt.

Conclusion: In our investigation, we found that viral going post is fake. We found out that this false claim was fabricated through old photographs.