Fact Check: Post showing blue-colored fruit named Moon melon is fake, there is no such fruit 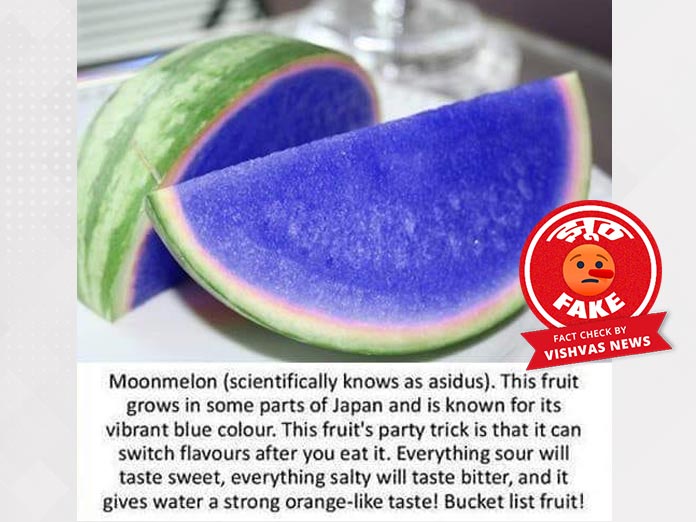 A viral post on social media shows a blue-colored fruit. The text accompanied by the fruit claims that the fruit is moon melon. It is scientifically known as asidus. It further states that the fruit grows in Japan and it switches flavors after you eat. Vishvas News investigated and found that the viral post is fake.

A post shared on social media purports to show a blue-colored fruit. The text in the post reads: Moonmelon (scientifically knows as asidus). This fruit grows in some parts of Japan and is known for its vibrant blue color. This fruit’s party trick is that it can switch flavors after you eat it. Everything sour will taste sweet, everything salty will taste bitter, and it gives water a strong orange-like taste! Bucket list fruit!

Vishvas News started its investigation by searching the viral claim over the internet. We found that the post is circulating all across social media with different versions.

Here is another version of the same post: This a Moonmelon, scientifically knows as asidus. This fruit grows in some parts of Japan, and it’s known for it’s weird blue color what you probably don’t know about this fruit, is that it can switch flavors after you eat it, everything sour will taste sweet, and everything salty will taste bitter and it gives water a strong orange-like taste, this fruit is Very expensive, and it coasts about ?16000 JPY (which is about 200 dollars).

The popular viral image has been circulating since 2011. We searched and found that “Asidus” isn’t the scientific name of any real fruit.

It is further claimed that Moonmelon can switch flavors after you eat it. But, when Vishvas News investigated, we found that there is a fruit that alters the flavor profiles of anything tasted afterward. However, that fruit isn’t a moon melon. It is actually a small red berry called miracle fruit.

As per wired.com, when you pop a red miracle berry into your mouth, for up to an hour, it’s juices coat your tongue and previously sour foods like lemon and vinegar magically taste deliciously sweet. The berry and its plant (Richardella dulcifica) grow in West Africa.

So, yes there exists a fruit that hacks your taste buds. But, it isn’t moon melon, it actually is red miracle berry.

The post showing a blue-colored food named blue moon melon is fake. It is a digitally manipulated photo.