Fact Check: Rahul Gandhi did not blame BJP for unemployment, viral video is altered and fake

The video going viral in the name of Rahul Gandhi with the claim that the eagles are unemployed in the Narendra Modi government’s tenure is fake and created with the intention of propaganda. 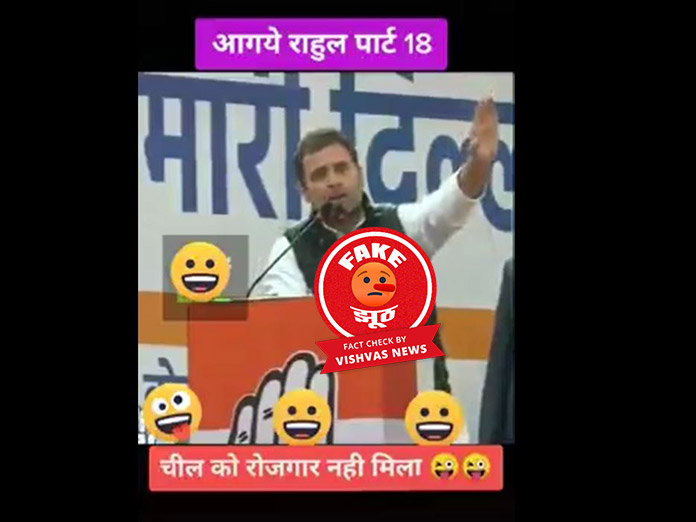 New Delhi (Vishvas News): Ahead of the assembly elections in Gujarat and Himachal Pradesh, a video clip of Rahul Gandhi’s speech is going viral on social media. It is being claimed that during his address, he expressed concern about the joblessness of the eagles during BJP’s tenure in the country.

Vishvas News, in its investigation, found the viral video clip to be edited and circulated on social media to spread propaganda against Rahul Gandhi. The original video is from campaigning during the Delhi elections when Rahul Gandhi targeted BJP and Narendra Modi over filth; an edited clip of this speech is being shared with a false claim.

Instagram user ‘l.creations.l’ has shared the viral video (archive link), in which Rahul Gandhi can be heard speaking about the jobless eagles in the country.

He says, “…..Tell me one thing…the eagle that is here…why are these eagles flying here. Tell me, what are these eagles doing here? Can anyone tell me why the eagles here are roaming here….Because they are not getting employment for the last five years.”

After hearing the video’s audio, it becomes clear that it is not natural, but it has been edited and tampered with. A search with appropriate keywords based on the viral video found a video uploaded two years ago on the YouTube channel of the Indian National Congress. According to the information given, this video is of Rahul Gandhi’s speech while addressing a public meeting in Kondli during the campaign for Delhi Assembly Elections 2020.

After listening beyond the 8.50-minute frame into the 23.30-minute video, we get the full context of the viral video clip. Targeting BJP and Narendra Modi, Rahul Gandhi says, “…..In the last five years, Narendra Modi has given 3 lakh 50 thousand crore rupees to people like Anil Ambani and Adani. Do you understand why? Because you were fighting among yourselves, you were divided. You don’t even know how much of your money goes into the pockets of Adani and Ambani.”

After this, he points towards the sky and says, “…… What are these eagles doing here? Tell me! Can anyone tell why these eagles are roaming here why are they roaming here?…… Tell me, how much will it take? Five crores, ten crores….Look, this girl is saying that five crores… ten crores. Well, it will take fifty crores. Narendra Modi Ji waived tax of one lakh 30 thousand crore rupees of the richest people of India just a few days ago.”

To confirm further, Vishvas News contacted Uttar Pradesh Congress spokesperson Abhimanyu Tyagi who said, “This video has been prepared with the help of editing, and BJP IT cell keeps doing this work continues to divert the attention of the people from the real issues.”

The user who shared the viral video with a false claim is followed by around 400 people on Instagram.

Conclusion: The video going viral in the name of Rahul Gandhi with the claim that the eagles are unemployed in the Narendra Modi government’s tenure is fake and created with the intention of propaganda.