Vishvas News in its investigation found this tweet to be fake. Ranjan Gogoi has not made any such tweet. 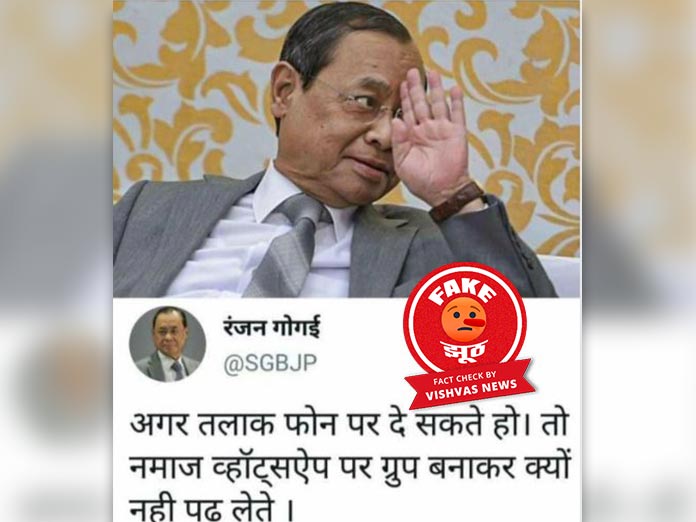 New Delhi (Vishvas News). Users on social media are sharing a screenshot of a tweet in the name of retired Chief Justice and now Rajya Sabha MP Ranjan Gogoi. The Twitter handle of the screenshot has a photo of Ranjan Gogoi and the tweet asks Muslims to offer prayers through the WhatsApp group. Vishvas News in its investigation found this tweet to be fake. Ranjan Gogoi has not made any such tweet.

Facebook user Sk Khuntwal shared a viral screenshot, in which it was written – “If you can give divorce over the phone. So why don’t you read Namaz on WhatsApp group”.

Continuing our investigation, we took the help of Google News search and tried to know whether Ranjan Gogoi has made any statement similar to the viral tweet. We did not find any such article in our search, which verifies this claim. If indeed Ranjan Gogoi had given such a controversial tweet or statement, it would have been in the news.

Now we searched the viral screenshot through Google reverse image, in the search we could not find this screenshot even on any reliable news websites.

Vishvas News contacted Dainik Jagran’s special correspondent Mala Dixit to confirm the viral post. She told us that this is a fake account of Ranjan Gogoi and he has not tweeted any such.

Now it was the turn of the social scanning of the Facebook user who shared the viral fake screenshot. We came to know that Facebook user Sk Khuntwal is a resident of Indore, Madhya Pradesh. And few fake posts have been shared from this profile before.

Conclusion: Vishvas News in its investigation found this tweet to be fake. Ranjan Gogoi has not made any such tweet.