In the investigation conducted by Vishvas News, the viral statement in the name of Rishi Sunak proved to be fake. He did not make any such statement about former Prime Minister of India Manmohan Singh, the image is digitally altered. 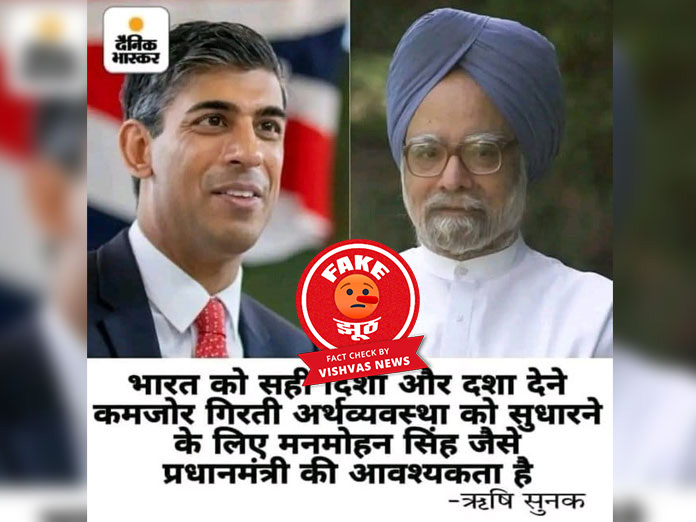 New Delhi (Vishvas News): After becoming the new Prime Minister of Britain, Rishi Sunak has been in the news for many reasons. Now, there is a viral post on social media claiming that Rishi Sunak has said that a Prime Minister like Manmohan Singh is needed to give the right direction to India to improve the weak and falling economy.

Vishvas News investigated the viral post and found it to be fake. Rishi Sunak did not give any such statement; an investigation revealed that the collage of a news report on Bhaskar.com was digitally altered and made viral.

Facebook page ‘New India ki Buland Awaaz’ shared a creative of Rishi Sunak in a post on October 27, which read, “A Prime Minister like Manmohan Singh is needed to give the right direction to India and improve the weak, falling economy.”.

The post used the pictures of Rishi Sunak and Manmohan Singh to describe the statement as that of the new Prime Minister of Britain.

Assuming this to be true, other users are also making it viral.

Vishvas News first used the Google open search tool to investigate the viral post. However, we could not find any such news confirming that Rishi Sunak has given any such statement regarding former Prime Minister Manmohan Singh.

The Google reverse image search tool was used to carry forward the investigation. On searching for the viral collage, we found the original collage on the official Twitter handle of Dainik Bhaskar. This was shared on 25 October. It was used with statements of Congress leaders P. Chidambaram and Shashi Tharoor after Rishi Sunak was elected as the new Prime Minister of Britain.

Vishvas News did a comparison study of real and fake collages. The part of the photo in the original collage was the same that was in the viral post in the name of Rishi Sunak. But the bottom part was different. The two collages can be seen together below.

In the next phase of the investigation, Dainik Bhaskar was contacted. Bhaskar.com head Prasoon Mishra told Vishvas News, “No such news has been run by my website about Rishi Sunak and Manmohan Singh, as claimed in the viral post. This is fake.”

Conclusion: In the investigation conducted by Vishvas News, the viral statement in the name of Rishi Sunak proved to be fake. He did not make any such statement about former Prime Minister of India Manmohan Singh, the image is digitally altered.