Fact Check: Scenes from a video game viral in the name of the Indian Air Force

Vishvas News found in its investigation that this video is not of a real incident but a video game clip. 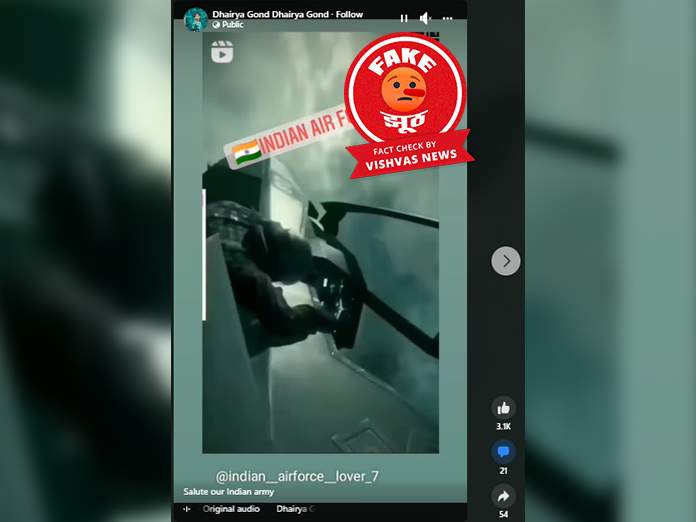 New Delhi (Vishvas News). A video is going viral on social media, in which a fighter pilot jumps from his fighter jet and shoots down an opponent’s fighter jet with a missile. It is being claimed with the post that this video is of the original incident, and the pilot seen in it is of the Indian Air Force. Vishvas News in its investigation found that this video is not of a real incident but a video game clip.

Archive versions of this post can be found here and here.

The video looks like a scene from a film, as it has been shot from different angles. Vishvas News first read the comments accompanying the post to verify the viral claim. In a comment, a user wrote “Its a seen from call of duty moderwatfare name ( rendezvous)”. From here we got hints that it could be a scene from a video game.

Based on this comment, we searched the keyframes of this video with keywords. We found this video uploaded on 09 Jun 2021 on a youtube channel named Battlefield and the title of the video was “Battlefield 2042 Official Reveal Trailer (ft 2WEI)”. This scene can be seen in the 5-minute video at 3:14 mark. All this means that the viral scene is not real, but related to a video game.

This game clip has been uploaded in many places with the same description that it is a clip of the Battlefield game.

Now it was timeto scan the profile of Dhairya Gond Dhairya Gond, the user who shared this post on Facebook. On scanning the profile, we found that the user is a resident of Uttar Pradesh. The user has 1700 Facebook friends.

Conclusion: Vishvas News found in its investigation that this video is not of a real incident but a video game clip.