Vishvas News investigated the viral claim about Shahrukh Khan’s video and it turned out to be misleading. The viral video is not from recent times but from the year 2016. 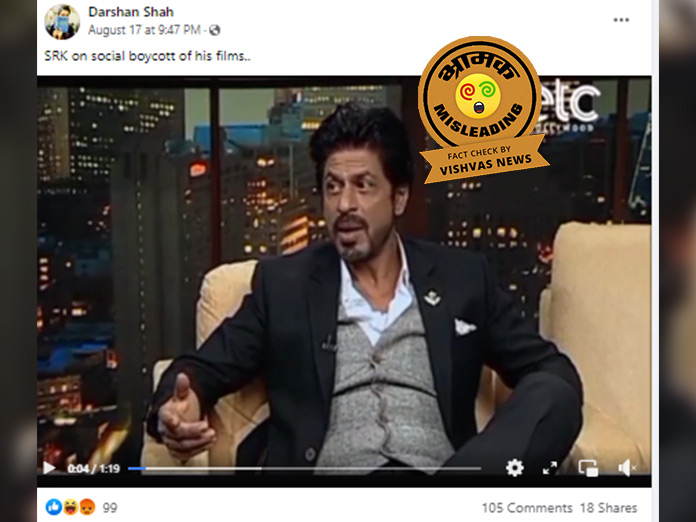 New Delhi (Vishvas News). A video of Bollywood actor Shah Rukh Khan is being shared on social media, claiming that he is saying that he is not afraid of social boycott in context of recent Bollywood boycott trend. The viral claim turned out to be misleading in the investigation of Vishvas News. The viral video is not recent, but from 2016. People are now sharing it in the wrong context.

Sharing the viral video, Facebook user ‘Boycott Bollywood Nepotism- Justice for Shushant Singh Rajput’ wrote in the caption, “SRK on social boycott of his films..” Amidst the recent Bollywood boycott trend, people are conceiving this as Shahrukh Khan’s statement regarding his upcoming film Pathan.

In the 1.19-minute viral video, Shah Rukh Khan is on a talk show with Komal Nahta and says, ” sometimes it is good yaar Komal… if the film doesn’t work as you expected then you find excuses… this is excuse… say that this has happened because of social boycott…” Nahta then asks Shah Rukh Khan, is there still a fear of boycotting films? To this Khan replies, “…I am not boasting but I am not going to be blown away by such winds… These winds only shake the bushes… With respect……but in this country, in India, the love that I get, I believe in it with full faith. With that I can say, very few people get that much love. One comment or a few things won’t weaken the love… People understand what is right or wrong… I don’t think boycott trend has made me or my film has affected or will ever affect me”.

People are sharing this video by linking it to his upcoming film Pathan, saying it is recent.

We also found a snippet of this interview uploaded on the official Facebook page of ETC Bollywood in 2016.

It is clear that this video is not recent but from 2016.

We also spoke to senior entertainment journalist Parag Chhapekar in this regard. He also confirmed that the video is from 2016.

Even after doing a keyword search, we could not find any such recent statement from Shahrukh Khan.

Vishvas News has recently done many fact checks regarding Bollywood Boycott. These can be read here.

At the end of the investigation, Vishvas News did a social scanning of the user ‘Boycott Bollywood Nepotism- Justice for Shushant Singh Rajput’, who posted the fake post. This group has 124.8K members.

Conclusion: Vishvas News investigated the viral claim about Shahrukh Khan’s video and it turned out to be misleading. The viral video is not from recent times but from the year 2016.