Fact Check: South Korea’s video viral in the name of the Indian Army

Vishvas News found in its investigation that this video is not from the Indian Army, but from South Korea. 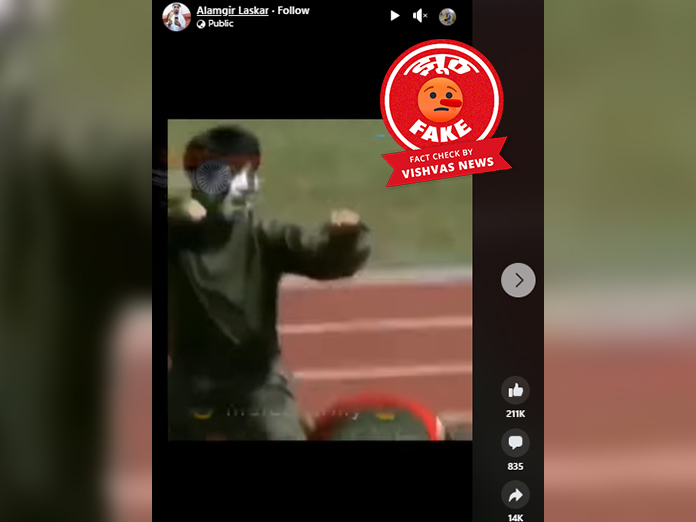 New Delhi (Vishvas News). A video is going viral on social media, in which a soldier can be seen performing combat acrobatics. It is being claimed with the post that the jawan seen in this video is of the Indian Army. Vishvas News found in its investigation that this video is not from India, but from South Korea.

The viral video has been shared by a user named Alamgir Laskar. The post reads, “#IndianArmy”. Also, Indian Army watermark can be seen on the top of the video.

Archive versions of this post can be found here.

Vishvas News first searched the keyframes of the video on Google reverse image to verify the viral claim. We found a video uploaded on a YouTube channel called Defense Flash News and the title of the video was, “K Force TV – South Korea Armed Forces Day Parade 2017 – Special Forces Extreme Taekwondo Demo!”. This scene can be seen in the 6-minute video at the 3:30 mark.

Since the video is quite clear, here the national flag of South Korea can be seen on the strap tied on the head arm of the soldier. All this means that the viral scene is from South Korea.

For more information, we contacted Indian Army spokesperson Sudhir. He confirmed that the video is not from the Indian Army.

Now it was time to scan the profile of user Alamgir Laskar, who shared this post on Facebook. On scanning the profile, we found that the user is from Delhi and currently resides in Kolkata. The user has 2,946 Facebook friends.

Conclusion: Vishvas News found in its investigation that this video is not from the Indian Army, but from South Korea.